What’s Causing You to Be Sleepy? 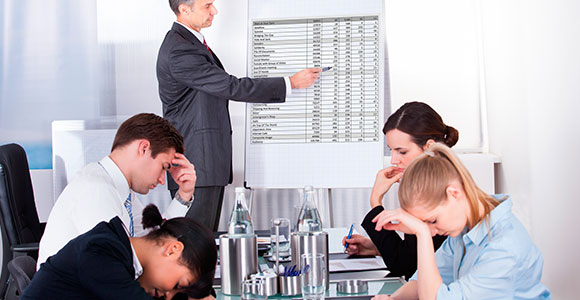 Look around you: the guy nodding off on the bus, the co-worker snoozing during a dull presentation, the people with heavy eyelids lined up at the coffee shop in mid-afternoon. Like them, your job may be leaving you sleep deprived — and you may not even realize it.

Excessive sleepiness can have serious consequences. You could doze off while waiting at a red light, for example. And not getting good sleep has been associated with high blood pressure, heart disease, diabetes, and weight gain.

“I do think that perhaps the No. 1 sleep problem in America is willful sleep limitation. People are working too hard and purposely limit themselves to six hours when they should be getting seven or eight,” says Lisa Shives, MD, founder of Northshore Sleep Medicine in Evanston, Ill., and a spokeswoman for the American Academy of Sleep Medicine.

Sleepiness appears to be on the rise, according to the National Sleep Foundation. In its 2009 Sleep in America poll, 20% of Americans reported that they averaged fewer than six hours of sleep per night. That’s compared to 13% in 2001.

Sleep problems stem from multiple causes: jet lag, working graveyard or rotating shifts that go against the body’s natural sleep rhythms, or skimping on sleep in order to stay on top of a full-throttle schedule.

While many of us are tired from skimping on sleep, others with sleep problems may have bona fide sleep disorders, such as sleep apnea, restless legs syndrome, or narcolepsy. People who work graveyard or rotating shifts may have shift work sleep disorder, marked by excessive sleepiness during night work and insomnia when they try to sleep during the daytime.

Regardless of the cause, excessive sleepiness “is becoming more of a legitimate complaint,” both among patients and doctors, says David G. Davila, MD, a National Sleep Foundation spokesman and board member who practices sleep medicine in Little Rock, Ark. He sees men and women who can’t muster enough alertness to finish mental tasks or who struggle to stay awake while driving — and many who doze off in his waiting room.

Most adults need seven to eight hours of sleep per night, although some people need more or less sleep time to be adequately rested.

Sleep woes — not getting enough sleep or poor quality of sleep — can have serious consequences. “Not having enough good sleep is linked to the major health problems of our time: hypertension, heart disease, stroke, diabetes, weight gain, and dementia,” Shives says.

If you’re getting enough shut-eye but still feel sleepy all the time, you could have a sleep disorder. Sleep disorders disrupt a person’s ability to fall asleep or stay asleep, or they may cause odd behaviors during sleep, such as sleepwalking. Some sleep disorders even prompt “sleep attacks,” in which people fall asleep uncontrollably during the day.

When new patients visit his sleep clinic, Davila tries to find out whether they’re having trouble with quantity or quality of sleep.

“The first question sleep doctors ask … is ‘Are they getting enough sleep? Are they filling up their sleep tank at night or not?’ That’s a big question because we think a lot of people are not. They’re sleep-deprived, either partially or intermittently or chronically,” he says. Many times, Davila says, making sure they get enough sleep reduces excessive sleepiness.

But if it’s not a “sleep quantity” problem, says Davila, “then we start thinking about quality of sleep. Could there be a sleep disorder?”

Watch for These Symptoms of a Sleep Problem

Sleep experts recommend that you talk to your doctor if you have any of these signs of sleep disorders:

Many sleep disorders are rare. For example, in 15 years of practice, Davila has treated only a few cases of recurrent hypersomnia, in which people have periods of extreme sleepiness that come and go. During an attack, a person may sleep up to 16-18 hours, rousing only to eat or use the bathroom. Episodes can last a few days or many weeks.

Insomnia: Insomnia may be a symptom of a sleep disorder, so people with this complaint may need a thorough evaluation, Shives says. But it can also be a sleep disorder by itself. Insomnia makes it difficult to fall asleep or stay asleep. Sleep quality may be poor, leaving people feeling unrefreshed when they awake.

Restless legs syndrome (RLS): RLS causes irresistible urges to move the legs while a person is lying down. The person may also feel creeping, crawling, burning, or painful sensations in the legs. In a related sleep disorder called “periodic limb movement disorder,” repetitive jerking movements or twitching of the legs or arms during slumber lead to fragmented, unrefreshing sleep.

Parasomnias: Parasomnias, or abnormal behaviors during sleep, include sleepwalking, sleep-talking, head-banging, and night terrors that cause people to sit up, flail, and scream. In one type of parasomnia called “rapid eye movement behavior disorder,” people may kick, punch, or wave their arms unintentionally (usually in response to a dream) while they’re in REM sleep. This sleep disorder usually afflicts older men, according to Shives. It has also been linked to an increased risk of Parkinson’s disease, she adds.

Narcolepsy: Narcolepsy’s main symptoms are excessive sleepiness during the day or recurring “sleep attacks” that cause people to fall asleep uncontrollably during normal waking hours. Some people also have sudden spells of muscle weakness following emotional excitement and may fall to the ground. Some people with narcolepsy experience sleep paralysis, where they can’t move when falling asleep or just waking up. Other symptoms include vivid dreams or hallucinations while falling asleep or waking up.

Got a Sleep Problem? Get Medical Treatment

Don’t just live with a sleep problem. People should take them seriously and seek help, Davila says. “A lot of complaints, especially restless legs syndrome, patients are embarrassed to bring it up. But it’s a legitimate complaint that can be helped,” he says.

“The same goes for sleepiness,” he says. “It was thought to be a sign of laziness and lack of motivation, [but] some patients need significant help with their sleepiness in order to drive safely and to function.”