What you should know about roseola 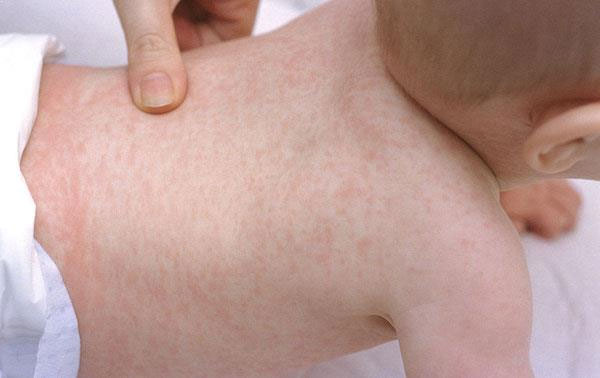 Symptoms include fever, runny nose, cough, and sore throat. A rash starts to occur when the fever ends. Roseola is not usually a serious condition. It typically resolves within a week or so after symptoms start.

Read on to discover the symptoms of roseola, and to learn how to treat this common condition.

Roseola symptoms typically appear within 5 to 15 days of infection with the virus. However, in mild cases, symptoms may not be noticeable.

Roseola may cause a rash that starts on the torso.
Image credit: Emiliano Burzagli, (2008, August 14)

A roseola rash starts on the torso before spreading to the arms, legs, neck, and face. It appears as small pink spots that may be flat or raised.

Some of the spots may have a lighter ring or halo around them. Roseola spots turn white or fade when pressed with a glass. This rash does not typically cause itching or discomfort and fades within a few days.

However, it is important to note that not all children get the rash.

Some children will develop mild upper respiratory symptoms before or with the fever. These symptoms may include:

A sudden, high fever is one of the first signs of roseola and when a person is most contagious. The fever can sometimes reach 105.0°F (40.5°C) and can last for 3 to 5 days.

What are the causes?

Roseola can spread between children even when no rash is present, and it can occur at any time of the year.

Most children will contract roseola at a young age. They are at greatest risk between the ages of 6 and 15 months of age when their immune systems have not yet developed antibodies to fight the virus, as this illness occurs upon virus exposure.

A child under 6 months of age may still be protected by its mother’s antibodies, which were passed to it, during gestation.

Roseola rarely causes complications, with the vast majority of people making a full recovery in approximately 7 days after their symptoms start. When complications do arise, they include:

If a child with roseola has a seizure, medical attention should be sought.

According to the United Kingdom’s National Health Service (NHS), some children with roseola have seizures or fits called febrile seizures. These seizures may occur in children who experience a rapid increase in temperature.

Seizures may cause a brief loss of consciousness, jerking of the limbs or head, and loss of bladder or bowel control.

Although alarming, febrile seizures do not usually cause harm to otherwise healthy children. However, emergency treatment should be sought.

Problems in people with compromised immunity

People with weak immune systems may experience complications if they contract roseola. Examples of groups with compromised immunity include people with HIV and AIDs or leukemia and recent recipients of organ transplants.

If people with weakened immunity acquire roseola, or experience a reactivation of a previous infection, they may develop a more severe case of the illness and struggle to recover from the virus.

Complications include pneumonia or inflammation of the brain known as encephalitis, which can be life-threatening.

What is causing my rash?
There are so many types of rashes, which can vary greatly from each other. Learn more about the different types.

Children who are displaying the following signs and symptoms should see a doctor:

People with compromised immune systems who encounter someone with roseola should contact their doctor immediately.

Emergency medical care should be sought if a child has a febrile seizure. These often occur due to a very high and sudden fever spike.

There is no specific treatment for the illness, but medications and home remedies can be used to reduce discomfort and manage symptoms.

It is important to stay hydrated when ill. Children should drink plenty of clear fluids, such as:

Carbonated drinks should have the carbonation removed before consumption to reduce intestinal gas in children.

This can be done by allowing the drink to stand for 1 to 2 hours or by shaking, heating, or stirring it.

Certain pain relief medications may be given to children on the advice of a doctor. Medications to reduce fever include acetaminophen (Tylenol) and ibuprofen (Advil, Motrin). A person should always follow the advice on the packaging, regarding correct doses and timings, or talk to a doctor if they are not sure.

Children under 16 years old should not be given aspirin unless a doctor recommends it. Aspirin use in children has been linked to Reye’s syndrome, a rare condition that can be life-threatening.

A doctor may prescribe the antiviral medication ganciclovir (Cytovene) for some people with weak immune systems to try to prevent the virus from replicating its DNA.

Antibiotics cannot be used to treat roseola or other viral infections, as they will not work against viruses.

Children may be more comfortable resting in bed until their fever subsides. However, if they are well enough to engage in play and other activities, they should not be forced to rest completely.

However, it is important for them not to overexert themselves or be around others while they are still considered to be contagious.

A person can reduce the discomfort of fever by:

Ice or cold water should never be used as this can cause chills.

Children can return to normal activities once they have been fever-free for 24 hours and do not have any other significant symptoms.

How can it be prevented?

There is no vaccine available to prevent roseola. Prevention involves limiting exposure to infected people. For this reason, it is important that children with roseola do not come into contact with other children until their fever has broken.

People who have contact with roseola should wash their hands frequently to avoid passing the virus on, especially to someone who does not have the antibodies to fight it. It is also a good idea to wipe down household surfaces regularly with antimicrobial sprays.

People can reduce the risk of infection by teaching children hygienic practices, such as ensuring they sneeze and cough into tissues and immediately dispose of the tissue afterward.

Also, it is best to avoid allowing them to share cups, plates, or utensils with others to reduce their exposure to infected saliva.