What is Wernicke-Korsakoff syndrome? 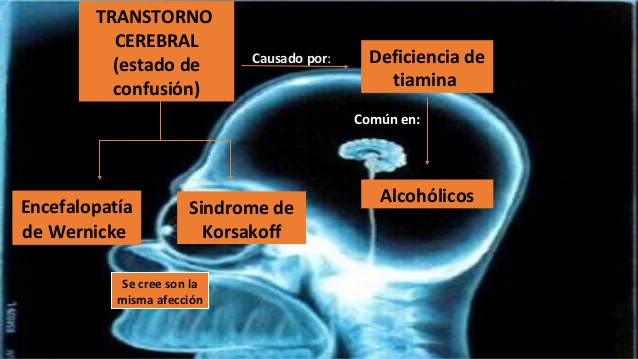 It is commonly linked to high consumption of alcohol over a period of time, but severe intestinal problems, cancer, and malnutrition are also causes.

Experts argue whether Wernicke-Korsakoff syndrome (WKS) is two separate but linked disorders, or if it is a spectrum of a single disease state.

Wernicke’s encephalopathy involves various cognitive (thinking) and nervous system changes. When not recognized or treated early, it can lead to permanent brain damage and death.

Most people with WKS develop Wernicke’s encephalopathy first, and later develop Korsakoff syndrome. Below we outline the symptoms of each condition:

Wernicke’s encephalopathy (WE) is a type of brain injury that classically causes three main problems:

It is caused by a deficiency of the vitamin, thiamine. Thiamine is required by all cells of the body. Humans cannot make it, so it must come from the diet. There are especially high levels of thiamine in the heart, brain, kidney, and liver.

When thiamine is not present in high enough amounts, the body cannot perform the basic and necessary tasks of cell function and problems begin. Brain cells are particularly sensitive to low levels of thiamine because it is required in many cellular pathways needed for normal brain activity. The individual may experience:

Often, individuals with WE may appear undernourished and underweight, or malnourished. They may also experience low blood pressure, low body temperature, and new memory problems.

Because of the symptoms of confusion, unsteadiness, and lack of coordination (ataxia), a person with WE may appear to be drunk when they are not.

Wernicke’s encephalopathy may be underdiagnosed because symptoms vary between people depending on the area of the brain most affected. It can also be masked by the effects of alcohol. If left untreated, it can progress to coma and then death.

Korsakoff syndrome (KS) is characterized by memory loss and problems carrying out and managing day-to-day functions. There is often difficulty learning new information. The person may also unintentionally make up information that bridges the gaps in their memory, this is called confabulation.

Confabulation has been described as the formation of “fictitious memories.” It is not a deliberate deception, the individual’s brain is attempting to fill memory gaps subconsciously.

Problems with short-term memory can lead to difficulty in making new memories and recalling recent events. An individual with KS may undergo personality changes, showing either apathy and a lack of concern, or displaying talkative and repetitive behavior. KS may gradually improve over time, but it is estimated that in about 25 percent of cases the condition is permanent.

As mentioned, WE is often the condition that occurs before KS develops. As KS symptoms increase, WE symptoms tend to subside. If WE is successfully treated, KS may not develop.

Wernicke-Korsakoff syndrome is most common among people with alcohol addiction. Thiamine deficiency is a common consequence of alcoholism.

Individuals whose bodies do not absorb nutrients properly, who are malnourished, or who fast for a long time may experience thiamine deficiency as well.

Heavy drinking is often accompanied by poor diet, but alcohol also interferes with the proper absorption of nutrients from the digestive system. Thiamine is needed by the body to convert food into energy. It is stored in small quantities in the liver, but only for up to 18 days.

WE can affect people who do not consume alcohol, but who have other problems with absorption or intake of vitamin B1; for instance, individuals who have:

How common is the syndrome?

The exact prevalence of WKS is unknown. Autopsies have found brain lesions matching symptoms of WKS in 0.4-2.8 percent of the general population in Western countries, including the United States.

Other figures suggest a prevalence of 1-2 percent in the general population, and 12-14 percent in those who consume large amounts of alcohol.

If Wernicke-Korsakoff is suspected, the patient will need to be hospitalized, in order to receive intravenous thiamine. At this stage, taking thiamine by mouth is not adequate. Hospitalization is also necessary to monitor and treat other symptoms and complications.

Thiamine replacement is the best way to treat the common symptoms, such as vision problems, eye movements, difficulties with coordination, and confusion.

Recovery of memory and cognition are the least likely aspects to improve and take the longest, but prompt thiamine treatment may prevent further deterioration.

Intravenous treatment usually continues until improvement is no longer observed. Although hospitals may treat thiamine deficiency differently, because there is not enough data to support one particular dosing schedule.

After this, the patient will receive oral doses of thiamine vitamin B-1 as a regular supplement.

To stop the syndrome from progressing, the patient will have to abstain completely from alcohol and follow a well-balanced diet. If it is not caused by alcohol, the underlying medical problem needs to be addressed.

Studies have suggested that about 25 percent of patients with Korsakoff syndrome recover, around half make a partial recovery, and around 25 percent remain the same.

To prevent Wernicke-Korsakoff syndrome, it is important to have a well-balanced, healthy diet, and not to abuse alcohol.

After leaving hospital, many patients will need support. Those who have problems with alcohol abuse often return to unstable living conditions and the possibility of drinking again, with an accompanying poor diet.

Anyone who has signs of a malabsorption problem should seek medical advice to prevent thiamine deficiency.

Foods high in thiamine (vitamin B-1) include: