What is triple X syndrome? 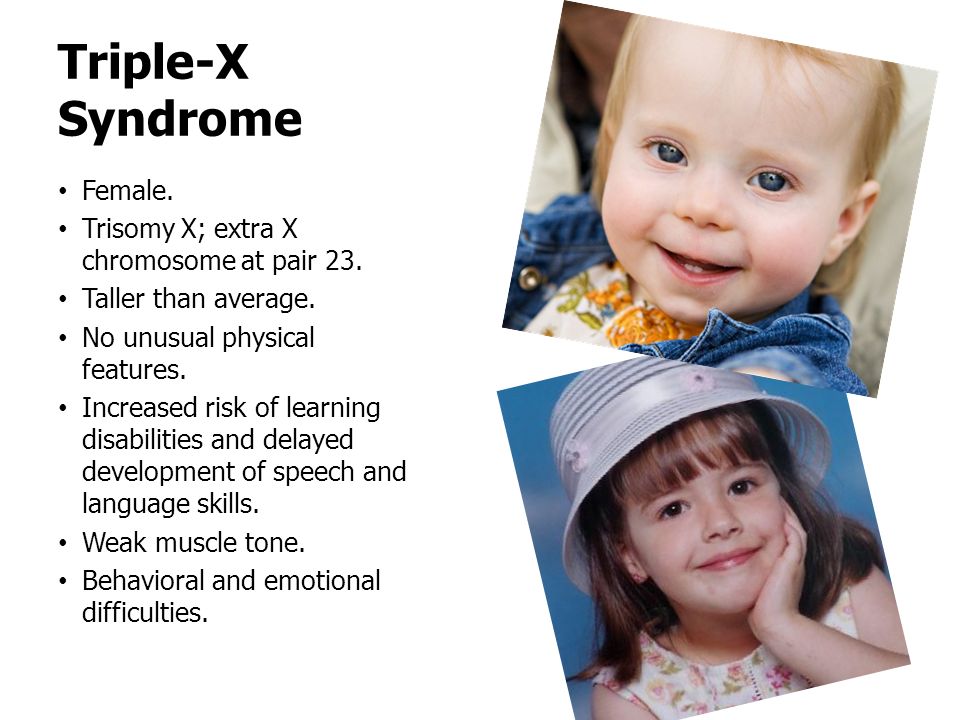 According to the National Institutes of Health (NIH) 5-10 girls with triple X syndrome are born in the United States each day.

The syndrome generally results from a mistake in the formation of the father’s sperm cell or the mother’s egg. Sometimes, triple X syndrome occurs when something goes wrong in the development of the embryo.

Triple X syndrome occurs in girls when they have three X chromosomes, instead of two.

In all-female cells, only one X chromosome is active at any time. Because of this, triple X syndrome does not usually cause unusual physical features or medical problems.

Some people have no symptoms at all, but some may have mild or severe symptoms. Symptoms vary from one person to another.

If signs or symptoms do occur, they may include:

Most girls and women with the syndrome have normal sexual development and can conceive children. Very rarely, reproductive issues can arise, including menstrual irregularities, early menstruation, and, occasionally, infertility.

A person with triple X syndrome does not normally look different from people without the syndrome. Many medical professionals do not regard the condition as a disability.

Everything that lives has genes. Genes are a set of instructions that decide what the organism is like, how it survives, and how it behaves in its environment. Genes occur in long strands of DNA called chromosomes. Chromosomes are found in virtually all the cells of the body. Genes decide whether a person will be male or female, tall or short, and what color their hair and skin will be. They also affect the risk of developing certain diseases, and how an individual responds to environmental triggers.

One of these 23 chromosome pairs in a human determines whether the person will be a man or a woman. Each person receives one sex chromosome from their mother and one from their father.

Triple X syndrome is not an inherited condition.

Diagnosis can be made with the help of analyzing a sample of amniotic fluid (amniocentesis).

Triple X syndrome can be diagnosed before the baby is born, through chorionic villus sampling (CVS) or amniocentesis, and a blood test after she is born.

CVS – tissue is taken from the placenta for examination, usually between the 8th and 10th week of pregnancy if the mother opts for it. This test is done to diagnose severe abnormalities that may be affecting the fetus; it is not specifically to diagnose triple X syndrome, but this will also be picked up.

Amniocentesis – this may also be done during pregnancy. Some amniotic fluid is collected and analyzed.

Blood tests may be used for chromosome analysis after birth if the doctor notices unusual physical features or delays in development.

All three tests examine the person’s collection of chromosomes, known as the karyotype.

There is no routine screening for triple X syndrome. If an embryo or fetus is found to have the syndrome, it is usually after screening for something else.

Therapists can help if the girl has physical, developmental, or speech delays. A pediatric psychologist can help with social problems.

A supportive environment is crucial, especially as some girls with triple X syndrome may be more susceptible to stress.

A girl with triple X syndrome who receives proper help and support can lead a full and normal life.

If help is not provided for developmental delays or motor skill delays and difficulties, this can lead to undue stress and anxiety, and eventually psychological problems and social isolation.

Getting the right help and support is extremely helpful for anyone who has the symptoms of triple X syndrome.