What is Non-24-Hour Sleep-Wake Disorder? 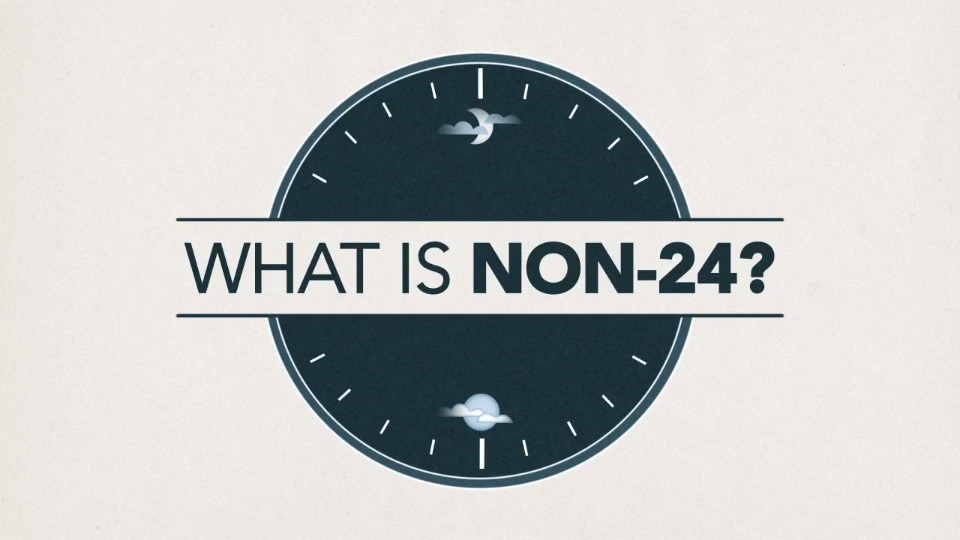 What is Non-24-Hour Sleep-Wake Disorder?

Non-24 is a serious, chronic circadian rhythm disorder that’s very common in people who are totally blind. It causes nighttime sleep problems and a wide range of daytime difficulties, including an overwhelming urge to sleep during the day that may lead to decreased function at work and school, as well as complications in one’s social life.

Non-24 begins with the master body clock. Everyone has one. For most people, it runs slightly longer than 24 hours and is reset every day by environmental light that’s detected by the eye and signals the brain. For people who are totally blind, however, the body clock becomes out of sync with the 24-hour day-night cycle. Because the non-24-hour body clock creates an ever-shifting sleep-wake cycle, Non-24 is classified as a circadian rhythm disorder.

Non-24 makes it difficult to fall asleep or stay asleep at night and creates an uncontrollable urge to sleep during the day. This may lead to exhaustion and a decrease in overall functionality and well-being, and problems with concentration.

How common is Non-24 among people who are totally blind?

Clinical studies estimate that 70% of people who are totally blind have Non-24. Overall, approximately 65,000 to 95,000 people in the United States have Non-24.

How is Non-24 diagnosed?

To diagnose Non-24 a physician will review a person’s symptoms, take a medical history and perform a physical exam. Writing your sleeping patterns in a notebook or keeping a sleep journal is also beneficial in many ways, because your notes will help you keep track of your experiences more accurately over longer periods of time. Sharing your sleep journal with your physician is a very helpful way to express the issues you are facing. A sleep journal can be as simple as notes on a piece of paper or in a notebook. A physician may also wish to hear about your experiences over time, so keeping a journal for three or more months is ideal. A sleep journal can be helpful in diagnosing a person with Non-24, because it helps to identify if a person is experiencing insomnia, excessive daytime sleepiness, or both, followed by periods of time in which sleep follows a regular pattern (sleeping at night, and being awake during the day).

How does the body know when to sleep and when to wake?

The timing of human sleep depends on the length of time since a person last slept and their master body clock.

The master body clock controls the timing of sleep with a rhythm that’s regulated by a tiny region of the brain called the suprachiasmatic nucleus (SCN). Environmental light passes through the eyes to the brain, resetting the master body clock and triggering the release of cortisol, the hormone that controls when we wake, when we eat, and other body functions. Hours later, following the built-in timing of the body clock and circadian rhythms, melatonin is released, giving rise to drowsiness and the need for sleep.

What happens when the master body clock is out of sync?

The master body clock regulates biological functions in an approximate 24-hour cycle. The cycle is usually longer than 24 hours and requires environmental light to keep the master body clock and circadian rhythms in sync with the typical 24-hour day. Without light, the body clock may run slightly longer than 24 hours. These extra minutes add up day by day, creating a personal rhythm that’s out of sync with the typical day.

Why don’t all people who are blind have Non-24?

The eye has two main functions: to perceive images and to capture light. Once captured, light information is sent to the brain, which signals the master body clock to reset every day to the typical 24-hour cycle. Without the ability to see light, the brain does not receive the signal and the master body clock can become out of sync.

About 70% of people who are totally blind have Non-24, but awareness and diagnosis is very low. Non-24 can also affect people who are not blind. However, these cases are rare, and the true rate of the disorder in the general population is not known.

What are the symptoms associated with Non-24?

One of the most common symptoms is difficulty sleeping at the desired time. People with Non‑24 experience daytime sleepiness that often results in daytime sleeping, as well as the inability to sleep throughout the night, if at all.

When circadian rhythms are out of sync, the master body clock shifts and people with Non-24 have difficulty getting to sleep at night. Each night there is a shift that pushes nighttime sleep back. This continual shift makes it virtually impossible to go to sleep at night and leads to extreme sleepiness during the day. This ongoing cycle leads those with Non-24 to constantly move between regular and irregular sleep times.

Why is Non-24 often misdiagnosed?

Many people initially cope with Non-24 by forcing themselves to keep a typical schedule. This may result in a chronic sleep deficit, with symptoms that can mimic depression, attention deficit hyperactivity disorder, chronic fatigue syndrome, fibromyalgia, or just fatigue. Someone who complains about being tired all the time may be misdiagnosed as suffering from depression and prescribed medication to address these symptoms. In some cases, of course, the patient is suffering from depression, but that may be secondary.