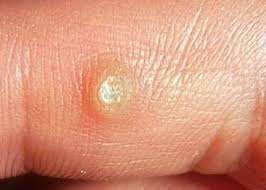 When skin warts appear, it can seem as if the harmless growths came out of nowhere.

“HPV is ubiquitous,” says dermatologist Conway Huang, MD, an associate professor of dermatologic surgery and cutaneous laser surgery at the University of Alabama at Birmingham. “We all come in contact with it,” throughout our lives, such as when shaking hands, turning doorknobs, or typing on keyboards.

Scientists have identified more than 100 unique types of the virus. And most people will have at least one common wart at sometime in their lives, usually on their hands.

How do people get common skin warts?

If you have any type of skin wart, it means that you came in contact with a wart-causing virus sometime in the past, though it could have been months ago.

“People get warts from other people with warts, they don’t get them from frogs and toads,” says Robert Brodell, MD, a dermatologist in Warren, Ohio. “The most common way is direct skin-to-skin contact, such as shaking hands with someone who has warts on their hand. You can also get the virus from inanimate objects, like towels that have been used by someone with a wart.”

The viruses are more likely to cause warts when they come in contact with skin that is damaged or cut. Getting a small scrape or biting fingernails may bring on wart. Similarly, cuts and nicks from shaving can provide an avenue for infection. This explains why men may have warts in the beard area, while women often have them appear on the legs.

Why do some people get a lot of warts and others don’t?

Since everyone encounters the viruses that cause warts, why do some people get skin warts while others do not? Doctors aren’t sure, but they believe that certain individuals have immune systems that are more able to fight off the viruses and prevent warts from growing.

For example, children get skin warts much more often than adults. This is probably because their immune systems have not yet built a strong defense against the numerous strains of human papillomavirus that they will encounter over their lifetimes.

Also, just as some people are more likely to get poison ivy, the genetic makeups and immune systems of certain individuals make them more susceptible to the viruses that cause skin warts.

It is also common to see warts on multiple siblings in the same family. And children of people who had skin warts as children are often quite susceptible to skin warts themselves, Brodell tells WebMD.

Still, experts have yet to determine exactly what is different in the immune systems of people who get skin warts frequently.

Is it possible to prevent skin warts?

If you are someone who frequently gets common skin warts, it is important to focus on prevention and treat your skin warts promptly when they do appear.

The first way to prevent skin warts is to avoid coming into contact with the virus:

The second way to prevent skin warts is to keep your skin as cut- and nick-free as possible.

“Try to keep skin healthy and moisturized to avoid having open cuts or fissures in the skin, which would provide a portal for the virus to get into the skin,” says Sandra Johnson, MD, a dermatologist in Fort Smith, Ark.

If you suffer from skin warts on your fingers and you’re prone to biting your fingernails or pulling on hangnails, it’s in your best interest to quit the habit. Also, when shaving, be sure to use a sharp razor that won’t tear or cut your skin.

What is the best way to remove warts?

If you do get skin warts, it’s time to act quickly.

“The most important thing when you see a wart is getting rid of it immediately,” Brodell says. Warts can spread on your body if left untreated.

“Every wart is a mother wart that can have babies,” says Brodell. “You need to get rid of all visible warts whenever they appear so you don’t have more spread.”

Most dermatologists agree that people can start with home remedies or wart removers from the drugstore.

“I usually advise trying at-home treatments — first with salicylic acid or clear nail polish or tape or any other method that suffocates the virus,” Johnson tells WebMD.

If you decide to use an over-the-counter salicylic acid or propane freezing solution, be sure that you’re diligent about using it. Follow directions closely, and realize it may take several weeks to several months to remove the entire wart.