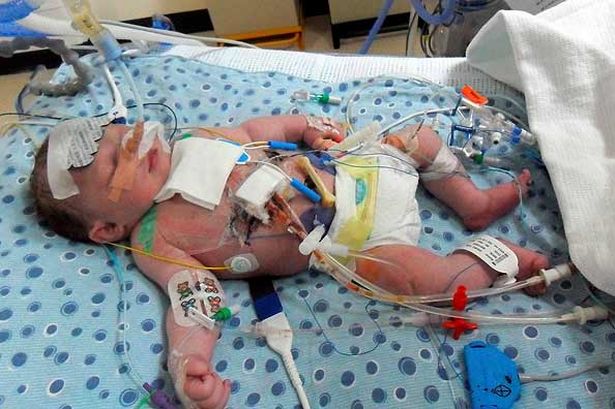 A baby boy in Canada is getting a healthy start in life after doctors performed an in-utero heart surgery, the first of its kind. At 23 weeks of pregnancy, Sebastian was diagnosed with a heart defect that would have prevented proper blood flow and heart function. This prompted doctors at Mount Sinai Hospital and SickKids in Ontario to insert and inflate a tiny balloon in his heart so he could get a chance to develop as a normal child.

“As crazy as it sounded, it was a much better alternative to a caesarean and then having a very short window of opportunity to do the balloon procedure,” Sebastian’s mom, Kristine Barry, told CTV News.

During prenatal checkups, scans revealed Sebastian had a congenital heart defect. His aorta and his pulmonary artery were switched, and he had no openings in the walls between the upper and lower chambers of his heart. This means blood couldn’t flow between the chambers to pick up oxygen.

Typically, babies born with heart defects can be sent to the neonatal unit for proper treatment, but the closed walls of Sebastian’s heart meant oxygen would not automatically circulate once he loses the oxygen supplied by the mother’s placenta. In other words, performing surgery after birth could have led to further complications.

“The clock ticks [so] that you have a few minutes and you start having brain damage and other organ damage,” Edgar Jaeggi, cardiologist, head of the fetal cardiac program at SickKids Hospital, and part of the two-hospital team that performed surgery on Sebastian, told CBC.