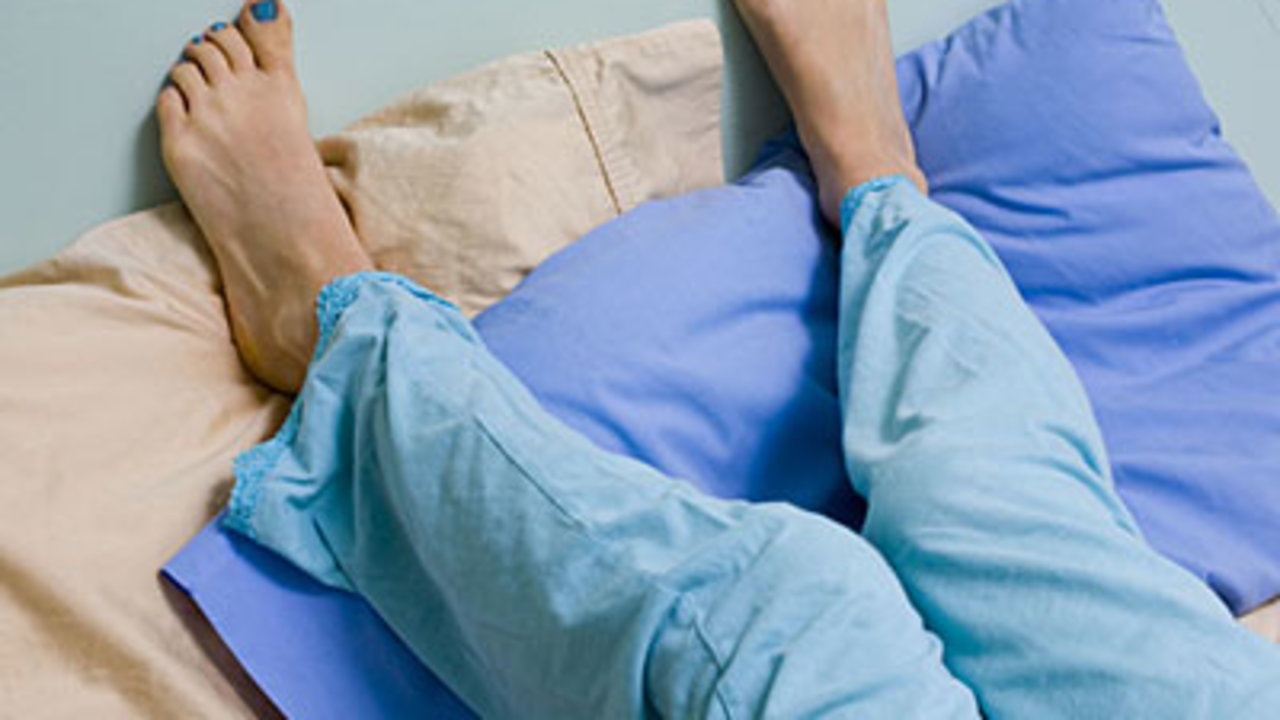 What is restless legs syndrome?

Restless legs syndrome (RLS), also known as Willis-Ekbom disease, is a condition that causes uncomfortable sensations, most often in the legs. These sensations have been described as tingly, crawling, creeping feelings, and cause the overwhelming urge to move the affected limb.

RLS symptoms typically occur when the person is sitting, resting, or sleeping, and often happen at night. The movements caused by RLS are called periodic limb movements of sleep (PLMS). Because of these movements, RLS can cause serious sleep problems.

Some people have primary RLS, which has no known cause. Others have secondary RLS, which is typically associated with nerve problems, pregnancy, iron deficiency, or chronic kidney failure.

For most people with RLS, symptoms are mild. But if your symptoms are moderate to severe, RLS can have a big impact on your life. It can prevent you from sleeping enough, and thus cause problems with daytime focus and thinking, your job, and your social activities.

As a result of these problems, RLS can lead to anxiety and depression. And the longer you have the condition, the worse it can get. It can even spread to other parts of your body, such as your arms (1).

Because of the effects RLS can have on your life, treatment is important. Methods of treatment are varied, as the root cause of RLS isn’t truly known. For instance, some researchers suggest that RLS is caused by problems with the brain chemical dopamine, while others suggest that it’s related to poor circulation.

Here we list the best treatments for RLS. Some of these you can try on your own. Others you can discuss with your doctor, who can help you create a treatment plan to help relieve your RLS symptoms.

Your first step in addressing RLS should be to figure out if something is causing it. While RLS can be related to things that are largely out of your control, such as genetics or pregnancy, other possible factors can be addressed.

These factors could be daily habits, medications you’re taking, health conditions you have, or other triggers.

The use of caffeine, alcohol, and tobacco can aggravate RLs symptoms. Limiting these substances could help reduce your RLS symptoms (2).

Certain medications can cause or worsen RLS symptoms. Examples include: (1, 2, 3).

Make sure your doctor knows about all drugs you’re taking, both prescription and over the counter. Talk to your doctor about whether they could be making your RLS worse, especially if you’re taking any of the medications listed above.

Certain health conditions have been found to be related to RLS. End-stage renal (kidney) disease, or ESRD, and nerve damage from diabetes have been linked with RLS. Iron deficiency anemia also has a strong connection with RLS (see iron below) (4, 5, 6).

You should discuss with your doctor how your health history might impact your RLS, especially if you have any of these conditions.

Some people claim that eating lots of sugar or wearing tight clothing aggravates their RLS symptoms. While there’s not a lot of research to back up these connections, you might want to do some trial-and-error to see what seems to affect your own symptoms.

BOTTOM LINE:The first step in treating RLS should be figuring out if something is causing it. You should consider habits such drinking alcohol or smoking, certain medications or health conditions, and other triggers for their impact on your RLS symptoms.

Having good sleep habits is advisable for anyone, but perhaps especially for people who have trouble sleeping, such as those with RLS.

While sleeping better may not resolve your RLS symptoms, it could help you offset the sleep loss you suffer from your condition. Try the following tips to make your sleep as restful and restorative as possible.

BOTTOM LINE:While they may not resolve your RLS symptoms, healthy sleep habits can improve your sleep and may help offset some of the effects of RLS.

Iron deficiency is thought to be one of the main causes of RLS. Several studies have shown that iron supplements can help ease RLS symptoms (1, 3).

A simple blood test can check for iron deficiency, so if you think this could be a problem for you, talk to your doctor.

If you test positive for iron deficiency, your doctor may recommend oral iron supplements, which you can find at your local pharmacy. In some cases, intravenous (IV) iron might be needed (1, 8).

And for people on hemodialysis, vitamins C and E supplements may help relieve RLS symptoms (4, 10).

BOTTOM LINE:Supplementation with iron or vitamins D, C, or E can help certain people with RLS. Your doctor can tell you if trying supplements would be a good idea for you.

Exercise can help you feel better if you have RLS.

Other studies have also found exercise very effective for RLS, especially in people with ESRD (4, 12).

Given these studies, plus others showing that activity can help improve sleep, exercise seems a natural fit for people with RLS (13).

One recommendation from the Restless Legs Foundation — exercise in moderation. Don’t work out to the point of aches and pains, as this could make your RLS symptoms worse (14).

BOTTOM LINE:Given its benefits for reducing RLS symptoms and improving sleep, regular exercise is a good habit to develop for people with RLS.

Like other types of exercise, yoga and stretching exercises have been shown to have benefits for people with RLS (12).

Another study showed that stretching exercises made significant improvements in the RLS symptoms of people on hemodialysis (17).

It’s not entirely clear to researchers why yoga and stretching works, and more research would be beneficial. But given these results, you might want to add some calf and upper leg stretches to your daily exercise routine.

Massaging your leg muscles could help ease your RLS symptoms. Many health organizations, such as the National Institutes of Health and the National Sleep Foundation, suggest it as an at-home treatment (3, 18, 19).

Although there’s not a lot of other research that backs up massage as an RLS treatment, a 2007 case study illustrated its benefits.

A 35-year-old woman who had 45-minute leg massages twice a week for three weeks had improved RLS symptoms throughout that time period. Her massages included a range of techniques, including Swedish massage and direct pressure to leg muscles (20).

Her RLS symptoms eased after two massage treatments, and didn’t start to return until two weeks after the massage regimen ended (20).

The author of that study suggested that the increased release of dopamine caused by massage could be a reason for the benefits. Also, massage has been shown to improve circulation, so that might be a reason for its effects on RLS (20, 21, 22).

As an added bonus, massage can aid in relaxation, which could help improve your sleep.

BOTTOM LINE:Whatever the reason, leg massage is an easy and relaxing treatment that could help ease your RLS symptoms.

Medication is a key treatment for moderate to severe RLS. Dopaminergic drugs are typically the first medications prescribed. They’re effective in relieving RLS symptoms, but they can cause side effects and other problems (1).

Other types of drugs can also help relieve RLS symptoms without causing these same types of problems.

Dopaminergic drugs increase the release of dopamine in your brain. Dopamine is a chemical that helps enable normal body movements (1).

Dopaminergic drugs likely help relieve RLS symptoms because the condition is associated with problems in the body’s production of dopamine.

Three dopaminergic medications have been approved by the U.S. Food and Drug Administration (FDA) to treat moderate to severe primary RLS:

While dopaminergic drugs have been shown to help improve RLS symptoms, long-term use can actually worsen symptoms. This phenomenon is called augmentation. To help delay this problem, doctors typically prescribe the lowest possible dose of these drugs (1, 26).

In addition, these drugs can become less effective over time. To help delay or prevent both of these problems, your doctor may prescribe a combination of dopaminergic drugs with other types of drugs to treat RLS (1).

A fourth drug that’s been approved by the FDA to treat RLS is called gabapentin (Horizant). This is an antiseizure medication (27).

It’s not entirely understood how gabapentin works to relieve RLS symptoms, but studies show it to be effective (28).

Another study compared the use of gabapentin with the use of ropinirole (one of the drugs approved by the FDA to treat RLS). Eight people with RLS trialed each of the drugs for four weeks, and both groups achieved similar levels of relief from RLS symptoms (29).

Benzodiazepines are drugs used to treat anxiety and sleep problems. Clonazepam and other types of these drugs are often prescribed for people with RLS in combination with other drugs (30).

While these drugs may not relieve RLS symptoms themselves, their benefit of improved sleep can be very helpful for people with RLS (30).

Opioids are typically used to treat pain. In some cases, usually when other medications aren’t helpful or cause augmentation, opioids can be used carefully in low doses to help treat RLS (26, 8).

Prolonged-release oxycodone/naloxone is one opioid that could help relieve RLS symptoms and improve sleep (4). However, because of the newer guidelines being developed for the use of opioids, this should be a last resort.

As with all opioids, use of these drugs should be carefully overseen by a doctor, due to their risk of misuse and dependence.

BOTTOM LINE:If you have moderate to severe RLS, your doctor will likely suggest one or more medications. Dopaminergic drugs are typically a primary RLS treatment, but they can cause side effects and augmentation, so their use must be managed carefully.

A foot wrap has been shown to help relieve RLS symptoms.

Called restiffic, the foot wrap puts pressure on certain points on the bottom of your foot. The pressure sends messages to your brain, which responds by telling the muscles affected by RLS to relax. This helps relieve your RLS symptoms (31).

A 2013 study of 30 people using the foot wrap for eight weeks found significant improvements in RLS symptoms and sleep quality (32).