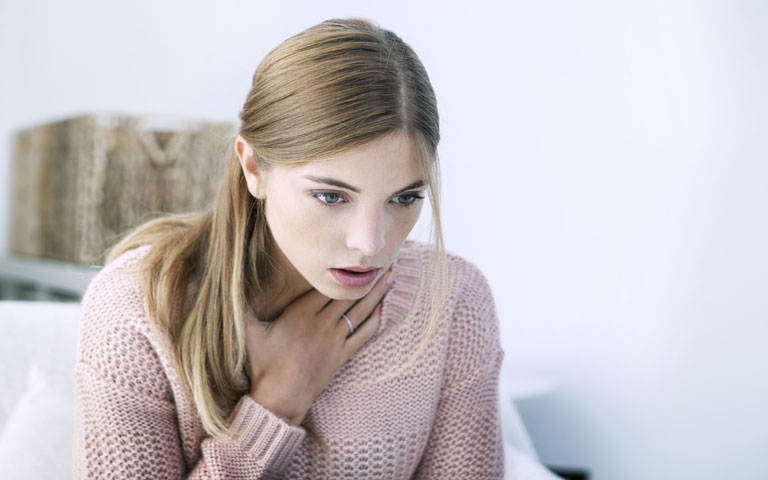 The term can be confusing because the condition is not exactly silent. It is marked by hoarseness, frequent throat clearing, and coughing.

The condition is caused by a reflux action, meaning a backward or return flow. In silent reflux, stomach acid flows back into the esophagus and irritates the throat.

It is called “silent” because individuals who have it do not show the typical symptoms associated with acid reflux, such as heartburn.

Silent reflux can develop in infants and adults. It is treatable.

Differences between silent reflux and other reflux conditions

Silent reflux can cause discomfort in the throat.

Laryngeal-pharyngeal reflux (LPR) is related to gastroesophageal reflux (GER). GER is a condition in which the contents of the stomach, instead of moving on through the digestive system, go back into the food pipe.

The contents of the stomach include stomach acids. When these acids make contact with the food pipe, they cause irritation, discomfort, and burning sensations. These sensations – often felt behind the breastbone, in the middle of the trunk – are called heartburn.

Most individuals with GER experience heartburn, but many people with LPR do not.

In infants, the muscular valves at the end of the food pipe are not fully developed. These valves keep the contents of the stomach from flowing back into, and through, the food pipe. This explains why it is common for infants to spit up, especially after they have been fed and their stomachs are full.

Adults often have a cold or the flu before they develop LPR. These conditions may make the vocal cords more sensitive to stomach acid.

Certain physical characteristics may make some individuals more likely to develop LPR, including those who have:

Individuals who use their voices a lot, such as teachers and singers, may also be more at risk from the condition.

Most people will experience heartburn or GER at some point in their lives. When these symptoms occur more frequently and persist, such as twice a week for 3 weeks or more, the condition is more serious. In this instance, it is known as gastroesophageal reflux disease, or GERD.

The National Institute of Diabetes and Digestive and Kidney Diseases report that roughly 1 in every 5 Americans have been affected by GERD.

Silent reflux develops when the stomach acid travels all the way back through the food pipe and reaches the back of the throat.

The most common symptoms of LPR in adults include:

Damage to the vocal cords can result if LPR is not treated in adults.

According to the UK’s National Institute for Care and Excellence (NICE), at least 40 percent of infants show some signs of reflux.

While it is common for infants to spit up, problems with breathing and feeding could be signs of something more serious, which should be investigated by a doctor.

Cough can be a sign of silent reflux in children.

The symptoms of silent reflux in infants and children include:

Researchers are currently exploring possible links between LPR in children and recurrent ear infections and sinusitis.

Some worrisome symptoms, such as projectile vomiting or bile, or bloodstained vomit, may not be signs of silent reflux. They could be indications of other health problems and should be reviewed by a doctor.

Due to the possibility of life-threatening events in children with LPR, prompt medical treatment is extremely important. If an infant has breathing and feeding problems along with any other symptoms of silent reflux, they should see a doctor as soon as possible.

Caregivers should watch for signs of GER in children with asthma, because it seems to be more common in children with this condition. Asthma may interfere with the ability to observe typical symptoms of GER.

Parents can help with diagnosis by providing the doctor with a thorough medical history of the child’s behavior and what prompted their concern. The doctor can draw from this information to make, will do a physical examination, and may conduct tests with a camera.

Adults should see a doctor if throat problems continue over time, especially if they experience a sensation of something stuck in their throat. A doctor might refer the patient to a specialist for ear, nose, and throat problems.

A diagnosis of LPR is usually made through a physical examination. Additional tests may be needed, such as a barium X-ray. The doctor may also do an exam of the stomach and food pipe, which involves passing a scope through the mouth.

Many adults manage to control their silent reflux symptoms by adjusting their eating habits and making changes in their lifestyles.

Ways to prevent acid reflux from irritating the throat include:

Adults with LPR may also be treated with a variety of medications. Some of these, such as antacids, are available over the counter.

What should a parent do for children with the condition?

Most infants outgrow their silent reflux by their first birthday, but some will require treatment.

The following practices are recommended for childhood LPR:

If breathing or feeding problems develop, medical help should be sought.

How do approaches differ for children and adults?

Diagnosing and treating LPR in infants and children requires special care and a stepped approach.
Feeding a child small amounts and keeping them upright after eating can reduce symptoms.

Such an approach may include the following steps:

Certain studies, such as contrast studies of the gut, are not recommended for infants, children, and young people.

An endoscopy of the gut may be called for if certain concerning symptoms are present, such as a failure to thrive without visible vomiting, trouble swallowing, a dislike of feeding, or unexplained distress.

Healthcare workers are advised not to treat infants and children for LPR unless at least two of the common symptoms of silent reflux are present.

According to NICE, 90 percent of infants recover from their GER-related symptoms before their first birthday, and further treatment is not necessary.

For adults with silent reflux, lifestyle changes can keep the throat from becoming dry and irritated. These actions include: