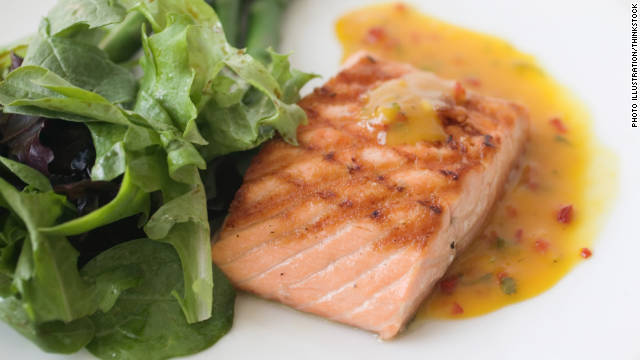 A cohort study of almost 1200 older adults in Japan showed that those who were in the third quartile for fish intake (111.1 g/d) had a significantly lower risk for MDD than those in the lowest quartile (57.2 g/d).

After adjusting for conditions such as stroke, diabetes, myocardial infarction, and cancer, the odds ratio (OR) was still significant.

However, there were no significant association with depression risk for the participants in the fourth highest quartile of fish intake (152.6 g/d; OR, 0.75), suggesting that there was a “reverse J-shaped effect,” said lead author Yutaka J. Matsuoka, MD, PhD, chief of the Division of Health Care Research, Center for Public Health Science, National Cancer Center Japan, Tokyo.

Still, he noted the results show that eating 100 g of fish each day can be protective for mental health.

“Systematic review of observational studies have revealed that fish consumption and levels of n-3 polyunsaturated fatty acids (PUFAs) such as eicosapentaenoic acid (EPA) and docosahexaenoic acid are associated with a reduced risk of depression,” write the investigators, adding that a reverse J-shaped association has been suggested previously.

“However, there is limited evidence from populations with high fish consumption and no studies have used a standard psychiatrist-based diagnosis of MDD.”

In Japan, consumption of fish, or n-3 PUFAs, is three to four times higher than in Western countries, they note.

Information gleaned from this new study “would be useful for the prevention of MDD in Japan as well as in other countries with a fish-eating population,” the researchers write.

The current analysis assessed 1181 participants in the Japan Public Health Center-based Prospective Study, which began enrollment in 1990. These individuals (58.4% women) were between the ages of 63 and 82 years (mean age, 73 years); they completed two food frequency questionnaires and underwent a mental health examination.

Daily fish consumption for each participant, in grams per day, was determined by multiplying standard portion size by frequency. The fatty acid composition table of Japanese foods was used to calculate the daily intake of n-3 PUFAs and n-3 PUFA subtypes.

Participants were divided into quartiles on the basis of intake of fish, EPA, docosapentaenoic (DPA) acid, n-6 PUFAs, and other nutrients.

As shown in the following table, moderate intake of fish, EPA, and DPA were associated with significantly reduced risk for MDD compared with each dietary type’s lowest quartiles.

The ORs were also significant for the third quartiles of fish and of DPA after adjusting for comorbid conditions (0.44 for each).

There were no significant associations found between MDD and any amount of consumption of total n-3 PUFAs, DHA, alpha-linolenic acid, total n-6 PUFAs, linoleic acid, or arachidonic acid.

“Emerging and compelling evidence suggests that diet and nutrition are extremely important factors in the high prevalence of depressive disorders, and our findings provide a basis to further examine the effectiveness of fish and n-3 PUFA intake for the prevention of MDD in…aged individuals,” write the investigators.

However, Dr Matsuoka said it is not likely that the results are generalizable. He noted that a previous study suggested the association between fish intake and depression in older adults in seven low- and middle-income countries varied markedly by country, he said.

“However, I believe that our results could be generalizable to relatively high-income Asian countries.”

Commenting on the findings for Medscape Medical News, Capt Joseph R. Hibbeln, MD, acting chief of the Section on Nutritional Neurosciences at the National Institute on Alcohol Abuse and Alcoholism, National Institutes of Health, said that the investigators raised important questions about nutrition and depression risk.