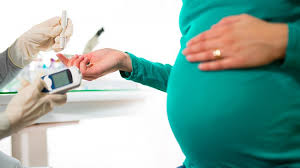 Gestational diabetes is a type of diabetes that affects pregnant women; it can occur in women who have never had diabetes previously and can cause problems for both mother and child.

Gestational diabetes tends to occur around the 24th week of pregnancy and is estimated to affect 9.2 percent of all pregnancies. Despite this prevalence, there is much to learn about the condition.

In gestational diabetes, the pancreas works hard to produce insulin, but the insulin is not able to lower blood glucose levels.

Excess glucose in circulation passes through the placenta, leading to elevated glucose levels in the baby.

This, in turn, causes the baby’s pancreas to produce excess insulin and, because it is receiving more energy than it needs, it is stored as fat.

This can lead to macrosomia, sometimes called “fat baby,” which has its own health issues. Also, because of the increased insulin level, the baby may have unusually low glucose levels at birth; breathing problems are another risk. Later in life, these children are more likely to go on to become obese or develop type 2 diabetes.

A breaking study, published in the journal Diabetologia, set out to investigate the relationship between gestational diabetes and depression.

The researchers took pregnancy data from the National Institute of Child Health and Human Development (NICHD) Fetal Growth Studies-Singleton Cohort. These data were collated to track pregnancies and develop a deeper understanding of how fetuses grow and develop.

For the present study, 2,334 non-obese and 468 obese women were tracked from week 8 to week 13 of pregnancy. Each participant answered questionnaires at three separate points in time, which covered any depressive symptoms they were experiencing. These questionnaires were answered when they first enrolled, at some point between week 16 and 22 and then, finally, 6 weeks after birth. Also, each participant was assessed for gestational diabetes.

Women with the highest depression scores during the first and second trimesters had almost triple the risk for gestational diabetes compared with women who had lower scores for depression.

As the first author of the study explains:

It is important to note that this study could not prove a cause and effect relationship. Although there does appear to be strong links, the exact nature of the interaction will be difficult to unpack. For instance, previous work has shown that depression is often associated with impaired glucose metabolism; this can lead to elevated glucose levels in the blood.

Also, increased glucose levels can lead to inflammation and hormonal changes, which might themselves lead to (or worsen) symptoms of depression. In short, the results of the study are fascinating, but they leave a vast array of new questions to answer.