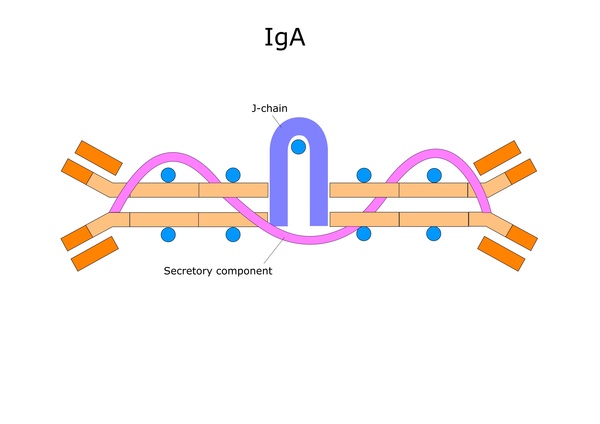 IgAD is commonly associated with normal B lymphocytes in peripheral blood, normal CD4+ and CD8+ T cells, and, usually, normal neutrophil and lymphocyte counts. Anti-IgA autoantibodies of the IgG and/or IgE isotype may be present. Peripheral blood may also be affected by autoimmune cytopenias, eg, autoimmune thrombocytopenia, [4, 5] and patients may have other autoimmune phenomena.

IgA was first identified by Graber and Williams in 1952; ten years later, the first patients with IgAD were described.

IgAD is a heterogeneous disorder, and the results of intensive study are beginning to elucidate genetic loci and molecular pathogenesis that contribute to various subtypes of this disorder. Several lines of evidence suggest that, in many cases, IgAD and common variable immunodeficiency (CVID) have a common pathogenesis, which is discussed further in Pathophysiology. Other data indicate different genetic risk factors. Family studies show variable inheritance patterns. Familial inheritance of IgAD occurs in approximately 20% of cases, [6] and, within families, IgAD and CVID are associated.

Many IgAD patients are asymptomatic (ie, “normal” blood donors) and are identified by finding a laboratory abnormality, without any apparent associated clinical disease. Some patients with IgAD may have the following associated conditions: (1) deficits in one or more immunoglobulin G (IgG) subclasses (this accounts for 20-30% of IgA-deficient patients, many of whom may have total IgG levels within the normal range) or (2) a deficient antibody response to pneumococcal immunization (specific polysaccharide antibody deficiency [SPAD]).

Some patients with IgAD later develop CVID, and family members of patients with CVID may have only selective IgAD. Characterization of the receptor for the transmembrane activator and calcium-modulator and cyclophilin ligand interactor (TACI), encoded by the gene TNFRSF13B ( tumor necrosis factor receptor superfamily member 13B), suggests that people with the C104, A181E, and ins204A variants may be at risk for IgAD that progresses to CVID. [9]

Primary IgAD is permanent, and below-normal levels have been noted to remain static and persist after 20 years of observation. [10] A recent report documents a rare case of reversion. [11]

Environmental factors such as drugs or infections can cause IgAD, but this form is reversible in more than half the cases (see Causes).

Although individuals with IgAD have largely been considered healthy, recent studies indicate a higher rate of symptoms. A 20-year follow-up study that compared 204 healthy blood donors with incidentally identified IgAD to 237 healthy subjects with normal IgA levels demonstrated that 80% of IgAD donors and 50% of control subjects had episodes of infections, drug allergy, or autoimmune or atopic disease. Severe respiratory tract infections occurred in 26% of IgAD subjects, in 24% of subjects with decreased IgA levels, and in 8% of control subjects; however, the incidence of life-threatening infections was not increased. IgAD is more common in adult patients with chronic lung disease than in healthy age-matched control subjects. [12]