How to treat a wart? 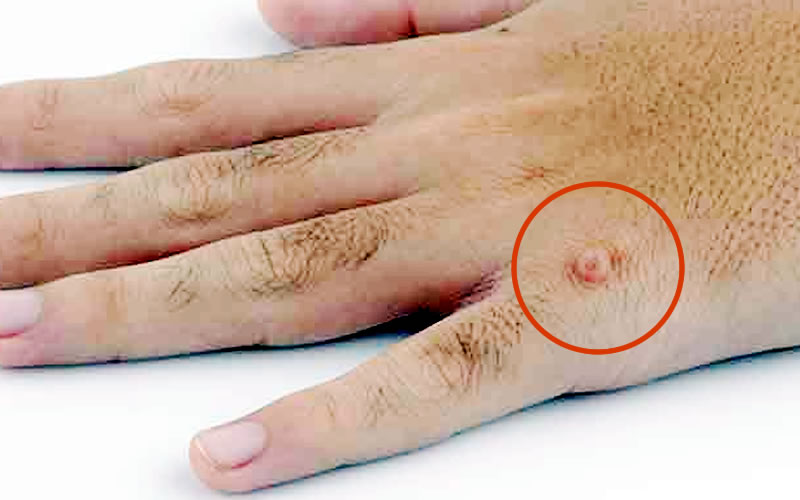 Warts are caused by viruses in the human papillomavirus (HPV) family.

The appearance of a wart depends on its location on the body and the thickness of the skin.

As many as 1 in 3 children and teenagers are estimated to have warts, but only 3 to 5 percent of adults. This is probably because the immune system becomes better able to prevent their development over time.

People with a weakened immune system are more likely to have warts.

Fast facts on wartsHere are some key points about warts. More detail is in the main article.

Palmer warts occur on the hand and are frequent in those who handle meat for a living.

Most warts clear up without treatment. It can take from a few weeks to several years, depending on the location and number of warts. They usually disappear faster in children.

One third of children are estimated to have warts, but studies have found that 50 percent of these disappear within a year, and 70 percent are gone after 2 years.

However, if they do not disappear, or if a wart causes concern, medical help is available.

A doctor will examine the wart, they may ask about family history, and they may take some tissue for tests.

What treatments are available?

All wart treatments are designed to irritate the skin and get the body’s own infection-fighting cells to clear the warts.

It is important to protect the skin around the wart before applying this treatment because salicylic acid may destroy healthy skin. Do not apply to the face.

Applying petroleum jelly or a corn plaster to the skin around the wart can protect it from damage.

Some tips can enhance the effectiveness of this treatment.

Treatment is normally applied daily for about 3 months. If the skin becomes sore, treatment should be stopped.

Freezing liquid, often nitrogen, is sprayed onto the wart, destroying the cells. A blister develops, which eventually scabs and falls off a week or so later.

This treatment must be carried out by a healthcare professional. If the wart is large, this may require a local anesthetic and several sessions.

Pharmacies sell dimethyl-ether or propane spray for self-administration. These should not be used on the face, and they are less effective than cryotherapy that is carried out by a qualified professional.

A dermatologist can use cryotherapy to remove warts.

This not common for warts, and there is a risk of scarring. Warts that resolve by themselves do not scar.

Sometimes a doctor may recommend surgery if other treatments have not worked.

Most warts can be shaved off with a surgical razor under local anesthesia.

Doctors may recommend applying a topical cream to the site even after the wart’s removal, to improve the chances of it clearing.

A doctor may apply a substance containing an extract from an insect called a blister beetle and other chemicals to the warts. The area is then covered with a bandage.

This is painless, but it creates a blister that may be uncomfortable. The blister lifts the wart from the skin, and the doctor removes the dead part of the wart.

The human immune system does not notice a wart, but if the system is stimulated locally, some activated immune cells in the area will recognize it and take action. This procedure leaves no scarring.

This treatment may not be suitable during pregnancy.

If warts do not respond to standard treatments, a dermatologist, or skin specialist, may offer other options.

Common warts, especially around the fingernails and toenails, may be difficult to eliminate completely or permanently.

The following are the most common types of wart.

Plantar warts appear on the base of the foot.

Common warts have a firm, raised, rough surface and may appear cauliflower-like.

They can occur anywhere, but they are most common on the knuckles, fingers, elbows, knees, and any area with broken skin.

Clotted blood vessels are often visible in common warts as small, darkened spots. These are known as seed warts.

Painful verrucae appear on the soles of the feet, heels, and toes.

They usually grow into the skin because the person’s weight pushes onto the sole of the foot. They normally have a small central black dot surrounded by hard, white tissue. Plantar warts are often difficult to clear.

Plane warts are round, flat, and smooth. They can be yellowish, brownish, or skin colored.

Also known as flat warts, they grow most often on sun-exposed areas.

They tend to grow in larger numbers, possibly between 20 and 100. However, of all wart types, they are most likely to disappear without treatment.

Filiform warts are long and thin in shape. They can grow rapidly on the eyelids, neck, and armpits.

Mosaic warts are multiple plantar warts in a large cluster.

Unlike moles, warts are often the same color as the person’s skin. Warts do not contain pus unless they become infected.

If infection occurs, they may require treatment with antibiotics.

When should I see a doctor?

It is a good idea to see a doctor if the wart:

Individuals who want the wart removed for cosmetic reasons should see a doctor.

Insurance is unlikely to fund cosmetic treatment, but primary care physicians, dermatologists, and podiatrists can all treat warts.

Verrucas and plantar warts can be treated by creams containing salycylic acid.

HPV viruses cause the excessive and rapid growth of keratin, which is a hard protein on the top layer of the skin.

Different HPV strains cause different warts. The wart-causing virus can be passed on by close skin-to-skin contact, and through contact with towels or shoes.

The virus can spread to other parts of the body through:

Having wet or damaged skin, and coming into contact with rough surfaces increase the risk of infection.

For example, a person with scratches or cuts on the soles of their feet is more likely to develop a verruca in and around public swimming pools.

Wearing shower shoes or flip flops while using public showers or walking near public swimming pools can help prevent this.

The risk of catching warts from another person is low, but they can be passed on, especially if the person has a compromised immune system. This includes people with HIV or AIDS, and those using immunosuppressants following a transplant.

Handling meat as an occupation will also increase the risk of contracting warts. A study carried out by the American Academy of Family Physicians showed that 33 percent of slaughterhouse workers and 34 percent of retail butchers have warts on the hand.

Most warts are harmless, but some strains of HPV can cause warts on, in, or around the genitals.

Anyone who develops genital warts should see their doctor for assessment.