How to Manage Acute Epistaxise 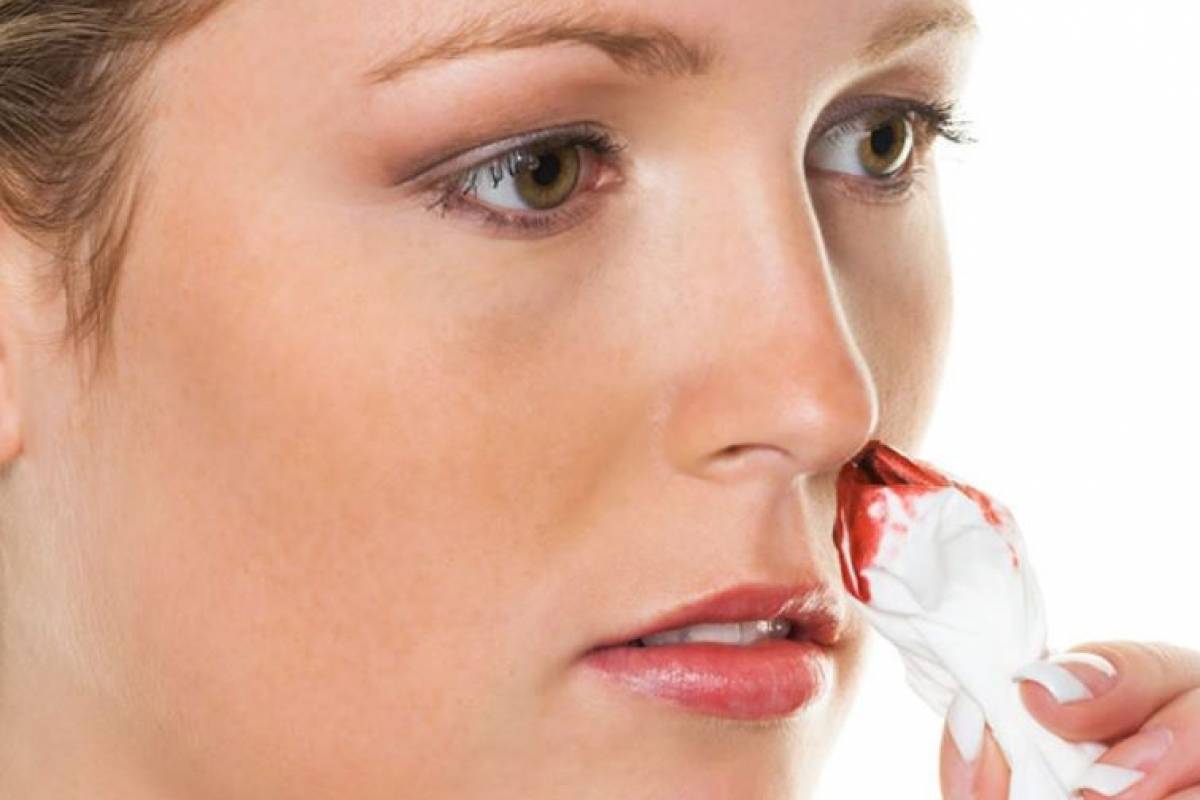 Epistaxis is defined as acute hemorrhage from the nostril, nasal cavity, or nasopharynx. It is a frequent emergency department (ED) complaint and often causes significant anxiety in patients and clinicians. However, the vast majority of patients who present to the ED with epistaxis (likely more than 90%) may be successfully treated by an emergency physician.

Note the duration, severity of the hemorrhage, and the side of initial bleeding. Inquire about previous epistaxis, hypertension, hepatic or other systemic disease, family history, easy bruising, or prolonged bleeding after minor surgical procedures. Recurrent episodes of epistaxis, even if self-limited, should raise suspicion for significant nasal pathology.

Use of medications, especially aspirin, nonsteroidal anti-inflammatory drugs (NSAIDs), warfarin, heparin, ticlopidine, and dipyridamole should be documented, as these not only predispose to epistaxis but make treatment more difficult.

Perform a thorough and methodical examination of the nasal cavity. Blowing the nose decreases the effects of local fibrinolysis and removes clots, permitting a better examination. Application of a vasoconstrictor before the examination may reduce hemorrhage and help to pinpoint the precise bleeding site. Topical application of a local anesthetic reduces pain associated with the examination and nasal packing.

Gently insert a nasal speculum and spread the naris vertically. This permits visualization of most anterior bleeding sources. Approximately 90% of nosebleeds can be visualized in the anterior portion of the nasal cavity. Massive epistaxis may be confused with hemoptysis or hematemesis. Blood dripping from the posterior nasopharynx confirms a nasal source.

A posterior bleeding source is suggested by failure to visualize an anterior source, by hemorrhage from both nares, and by visualization of blood draining in the posterior pharynx.

The differential diagnosis includes the following:

Other problems to be considered include the following:

A study by Szyszkowicz et al suggested that an association exists between air pollution exposure and ED visits for epistaxis. The report indicated that the number of such ED visits rises with increases in the interquartile range for the concentration of ozone and PM-10 (particles with a diameter of up to 10 micrometers). [3]

A prospective study on the influence of meteorologic factors on nosebleeds indicated that air temperature affects epistaxis rates, although the report, which involved 310 patients, did not find the incidence to be linked to air pressure, rainfall, humidity, wind speed, or duration of sunlight. [4]

Gowns, gloves, and protective eyewear should be worn. Adequate light is best provided by a headlamp with an adjustable narrow beam. Patients should be positioned comfortably in a seated position, holding a basin under their chin.

As always, first address the ABCs (A irway, B reathing, and C irculation). Rarely, severe epistaxis may necessitate endotracheal intubation.

Stable patients should be instructed to grasp and pinch their entire nose, maintaining continuous pressure for at least 10 minutes. Make sure that they compress the soft nose tissues against the nasal septum; pinching the hard, incompressible nasal bones will not aid hemorrhage control.

Patients with significant hemorrhage should receive an intravenous (IV) line and crystalloid infusion, as well as continuous cardiac monitoring and pulse oximetry. Patients frequently present with an elevated blood pressure; however, a significant reduction can usually be obtained with analgesia and mild sedation alone

Specific antihypertensive therapy is rarely required and should be avoided in the setting of significant hemorrhage. The relation between hypertension and epistaxis is often misunderstood. [5, 6, 7] Patients with epistaxis commonly present with an elevated blood pressure. Epistaxis is more common in hypertensive patients, perhaps owing to vascular fragility from long-standing disease.

Hypertension, however, is rarely a direct cause of epistaxis. More commonly, epistaxis and the associated anxiety cause an acute elevation of blood pressure. Therapy, therefore, should be focused on controlling hemorrhage and reducing anxiety as primary means of blood pressure reduction.

If a bleeding point is easily identified, gentle chemical cauterization may be performed after the application of adequate topical anesthesia. The tip of a silver nitrate stick is rolled over mucosa until a gray eschar forms. To prevent septal necrosis or perforation, only 1 side of the septum should be cauterized at a time. To be effective, cauterization should be performed after bleeding is controlled. Thermal cauterization using an electrocautery device is reserved for more aggressive bleeding and is done with the patient under local or general anesthesia.[8]

If attempts to control hemorrhage with pressure or cauterization fail, the nose should be packed. Options include traditional nasal packing, a prefabricated nasal sponge, an epistaxis balloon, or absorbable materials. [9, 10, 11, 12, 13]

Traditional anterior nasal packing with petrolatum gauze has largely been supplanted by the use of tampons and balloons, which are readily available and more easily placed. This method is commonly performed incorrectly, using an insufficient amount of packing placed primarily in the anterior naris. When placed in this way, the gauze serves as a plug rather than as a hemostatic pack. Physicians inexperienced in the proper placement of a gauze pack should use a nasal tampon or balloon instead.

The proper technique for placement of a gauze pack is as follows. Grasp the gauze ribbon about 6 inches from its end with a bayonet forceps. Place it in the nasal cavity as far back as possible, ensuring that the free end protrudes from the nose. On the first pass, the gauze is pressed onto the floor of nasopharynx with closed bayonets.

Next, grasp the ribbon about 4-5 inches from the nasal alae, and reposition the nasal speculum so that the lower blade holds the ribbon against lower border of the nasal alae. Bring a second strip into the nose, and press downward.

Continue this process, layering the gauze from inferior to superior until the naris is completely packed. Both ends of ribbon must protrude from the naris and should be secured with tape. If this measure does not stop the bleeding, consider bilateral nasal packing.

Trim the compressed sponge (eg Merocel) to fit snugly through the naris. Moisten the tip with surgical lubricant or topical antibiotic ointment. Firmly grasp the length of the sponge with a bayonet forceps, spread the naris vertically with a nasal speculum, and advance the sponge along the floor of the nasal cavity. Once wet with blood or a small amount of saline, the sponge expands to fill the nasal cavity and tamponade bleeding (see the images below). 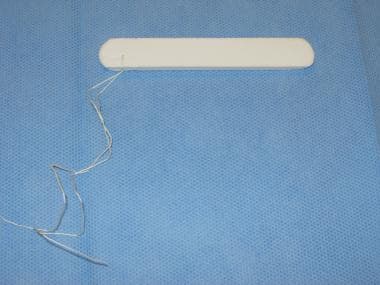 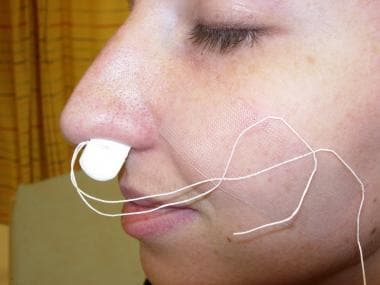 Anterior epistaxis balloons (eg, Rapid Rhino) are available in different lengths (see the images below). A carboxycellulose outer layer promotes platelet aggregation. The balloons are as efficacious as nasal tampons, easier to insert and remove, and more comfortable for the patient. To insert the balloon, soak its knit outer layer with water, insert it along the floor of the nasal cavity, and inflate it slowly with air until the bleeding stops. 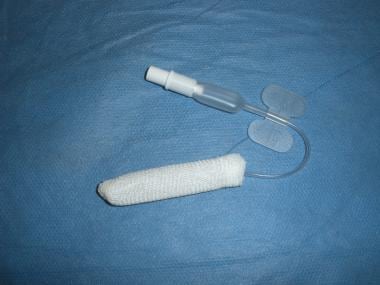 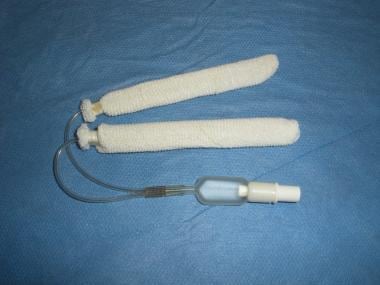 Posterior epistaxis is frequently treated with double-balloon devices that have separate anterior and posterior balloons.

If a Foley catheter is used, place a 12-16 French catheter with a 30-mL balloon into the nose along the floor of the nasopharynx, until the tip is visible in the posterior pharynx. Slowly inflate the balloon with 15 mL of sterile water, pull it anteriorly until it is firmly seated against the posterior choanae, and secure it in place with an umbilical clamp. Use a buttress clamp with cotton gauze to avoid pressure necrosis on the nasal alae or columella. Finally, place an anterior nasal pack.

Absorbable materials such as oxidized cellulose (Surgicel), gelatin foam (Gelfoam), and gelatin and thrombin combination (FloSeal) are suitable alternatives to nasal packing for anterior bleeds. [15] They directly tamponade bleeding sites, increase clot formation, and protect the nasal mucosa from desiccation or further trauma. They are easy to use and comfortable and conform to the irregularity of the nasal contours. [16, 17]

Tumors or other serious pathology are infrequent causes of epistaxis. However, all patients who present with epistaxis should have follow-up care arranged with an otolaryngologist for a complete nasopharyngeal examination. Recurrent unilateral epistaxis should particularly raise concern for neoplasm. [8]

Consider placing patients on a broad-spectrum antibiotic (eg, a penicillin or first-generation cephalosporin) to cover all likely pathogens in the context of the clinical setting.

Patients who take warfarin may generally continue their current regimen unchanged. Temporary discontinuation of warfarin or active reversal of coagulopathy is indicated only in cases of uncontrolled hemorrhage and a supratherapeutic international normalized ratio (INR).