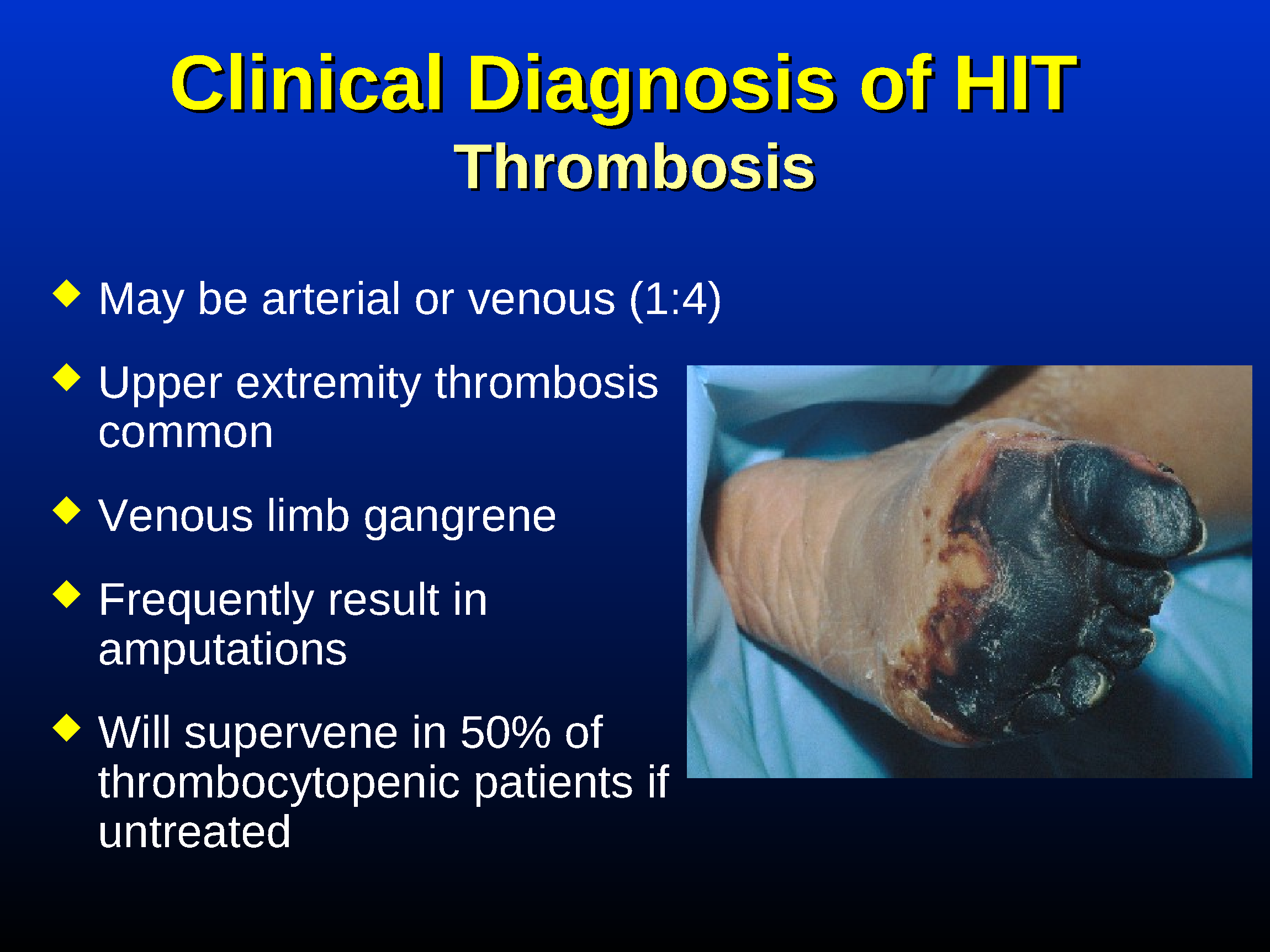 Heparin-induced thrombocytopenia (HIT) is a complication of heparin therapy. [1]There are two types of HIT. Type 1 HIT presents within the first 2 days after exposure to heparin, and the platelet count normalizes with continued heparin therapy. Type 1 HIT is a nonimmune disorder that results from the direct effect of heparin on platelet activation. [2, 3]

Type 2 HIT is an immune-mediated disorder that typically occurs 4-10 days after exposure to heparin and has life- and limb-threatening thrombotic complications. [2]In general medical practice, the term HIT refers to type 2 HIT.

HIT must be suspected when a patient who is receiving heparin has a decrease in the platelet count, particularly if the fall is over 50% of the baseline count, even if the platelet count nadir remains above 150 x 109/L. Clinically, HIT may manifest as skin lesions at heparin injection sites or by acute systemic reactions (eg, chills, fever, dyspnea, chest pain) after administration of an intravenous bolus of heparin.[4]

Diagnosis of HIT is based on the combination of clinical findings, thrombocytopenia characteristics, and laboratory studies of HIT antibodies. See Workup. Treatment of HIT begins with discontinuation of all heparin products (including heparin flushes of intravenous catheters). The patient should then be started on an alternative anticoagulant. See Treatment and Medication.

Factors that increase the risk for heparin-induced thrombocytopenia (HIT) are as follows:

Clinical features that help distinguish HIT from other forms of thrombocytopenia include the timing of onset and the presence of thrombosis (eg, venous thromboembolism) or other sequelae. In contrast to other drug-induced immune thrombocytopenia syndromes, HIT is generally not associated with bleeding. [34]

Onset of HIT usually occurs 5-14 days after the start of heparin therapy. However, in patients with recent prior heparin exposure (within the past 100 days), persistence of circulating HIT antibodies may result in rapid-onset HIT, in which the platelet count falls within 24 hours of starting heparin. [2]

Onset of HIT may also occur after heparin cessation. Delayed-onset HIT should be considered when a patient presents with thrombosis and unexplained thrombocytopenia up to 3 weeks after the end of heparin therapy. [35]

Patients with heparin-induced thrombocytopenia (HIT) may present with unusual characteristic sequelae, including the following:

Diagnosis of heparin-induced thrombocytopenia (HIT) can be challenging, and both underdiagnosis and overdiagnosis pose potential dangers. Failure to diagnose HIT increases the risk of thrombosis, amputation, or death, while misdiagnosis can result in major hemorrhage (in thrombocytopenic patients treated with alternative anticoagulants) or thrombosis (if heparin treatment is suspended unnecessarily). [38]Consequently, pretest scoring systems have been devised to guide diagnosis of HIT.

The 4Ts is a pretest clinical scoring system for HIT that is widely used in clinical practice. [38] See the Table below. The title refers to four characteristics of HIT:

A systematic review and meta-analysis by Cuker and colleagues found that a low-probability 4Ts score was a robust means of excluding HIT, with a negative predictive value of 0.998 (95% confidence interval [CI], 0.970-1.000). These researchers proposed that in patients with a low-probability 4Ts score, it may be possible to exclude HIT without further laboratory testing and continue heparin.

Overdiagnosis of HIT in surgical patients with critical illness has been reported. [41] A retrospective study in surgical intensive care unit patients by Berry and colleagues found that 8.6 % of patients with low-probability 4Ts scores were positive for HIT on laboratory testing, and 57% of patients with high-probability scores of 6-8 were HIT negative. These researchers concluded that testing or treatment for HIT should not depend on the 4Ts score alone. [42]

The HIT expert probability score (HEP) is a more detailed system developed to improve on the diagnostic utility of the 4Ts score. Testing in a validation cohort showed that the HEP model was 100% sensitive and 60% specific for determining the presence of HIT, and demonstrated better correlation with serologic HIT testing and better interobserver agreement than the 4Ts score. Nevertheless, the researchers cautioned that prospective multicenter validation is warranted

All patients should have baseline platelet counts measured before heparin treatment is started. Guidelines from the American College of Chest Physicians (ACCP) suggest basing further platelet counts on the patient’s risk of HIT. For patients whose risk is considered to be greater than 1% (eg, patients receiving unfractionated heparin after cardiac or orthopedic surgery), the ACCP suggests monitoring the platelet count every 2 or 3 days from days 4-14 of heparin therapy (or until heparin is stopped, whichever comes first). [43]

If the platelet count falls by over 50% of the baseline count, even if the nadir remains above 150 x 109/L, and/or a thrombotic event occurs, diagnostic tests should be performed. [43] Diagnostic tests for HIT consist of immunoassays and functional assays.

If heparin-induced thrombocytopenia (HIT) is suspected, the first step is to discontinue all heparin products immediately and avoid any further exposure. An order to simply “discontinue heparin” may not necessarily prevent heparin exposure, because unfractionated heparin (UFH) is commonly used to flush catheters.

Warfarin may cause microthrombosis in patients with HIT. These patients typically present with an international normalized ratio (INR) greater than 4, which corresponds to severe protein C depletion. Initiation of warfarin should be postponed until substantial platelet recovery. Preferably, warfarin should not started before the platelet count exceeds 150 x 109/L. [2, 55] If warfarin has already been started, vitamin K should be given. [43]

Platelet transfusions should be avoided in HIT, as they may increase the thrombogenic effect. [55] Guidelines from the American College of Chest Physicians (ACCP) suggest limiting platelet transfusions to patients with severe thrombocytopenia who are experiencing bleeding or undergoing an invasive procedure with a high risk of bleeding. [43]

Patients with HIT are at high risk for thrombotic events and should be treated with alternative anticoagulants, typically a direct thrombin inhibitor (DTI). The US Food and Drug Administration (FDA) has approved the DTI argatroban (Acova) for prophylaxis and treatment of thrombosis in patients with HIT. The DTI bivalirudin is approved for use in patients who are undergoing percutaneous coronary intervention (PCI) and have, or are at risk for, HIT or HIT with thrombosis (HITT). The DTI lepirudin was discontinued by the manufacturer in May 2012.

The indirect factor Xa inhibitor fondaparinux (Arixtra) is not approved for use in HIT, but some experts consider it an important treatment option, especially in stable, non–critically ill patients. [53, 56]

Another indirect factor Xa inhibitor, danaparoid, is no longer available in the United States but is used in Canada, Europe, and Australia. The ACCP recommends the use of fondaparinux in pregnant patients with HIT if danaparoid is not available, as this agent does not cross the placenta. [43]

Several novel oral anticoagulants exist (eg, rivaroxaban,dabigatran,apixaban), and preliminary evidence suggests that they may be beneficial for HIT, particularly in cases refractory to standard therapies. [57, 58, 59] However, these agents have not been fully assessed for treatment of patients with HIT and none have FDA approval for use in HIT.