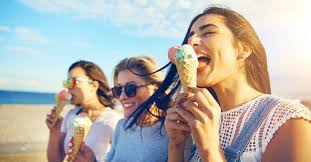 Most parents would consider it a crime to give a child ice cream for breakfast. But they might rethink allowing their kids to have a scoop of the cold, sweet treat first thing in the morning, if they knew it could make them smarter. Although an early morning sugar rush may be parents and teachers worst fears, a new study recently found eating ice cream first thing in the morning can actually be beneficial for the brain. The study, published by Kyorin University professor Yoshihiko Koga, said eating ice cream right after waking up can result in improved instances of alertness and mental performance.

The study, which was published on Japan’s Excite News website Tuesday, compared participant’s brain activity in people who had been given ice cream immediately after waking up with those who had not eaten ice cream. Koga found that people who had consumed ice cream for breakfast showed better reaction time and were able to process information better than those who did not have the ice cream. Further tests of brain activity also showed that the people who had ice cream first thing in the morning had an increase in high-frequency alpha waves, which are associated with higher levels of alertness and can reduce mental irritation, the report said.

Subjects were tested a second time, during which they were given cold water instead of ice cream immediately after waking up. Although the results from that particular test did show higher levels of alertness and mental capacity, people who had ice cream for breakfast showed significantly higher mental stimulation.

More research still needs to be conducted to thoroughly determine what specific ingredient in ice cream could be responsible for the mental boost. Koga said in the report that he is also hoping to determine if ice cream is a trigger for positive emotion and higher levels of energy.

As for the sugar high that may come along after eating ice cream for breakfast, that may also be something worth reconsidering, according to a 1994 study that tested the affects of sugar on a group of children and found that sugar doesn’t actually change behavior or affect cognitive skills.