Does having kids dampen your sex life? 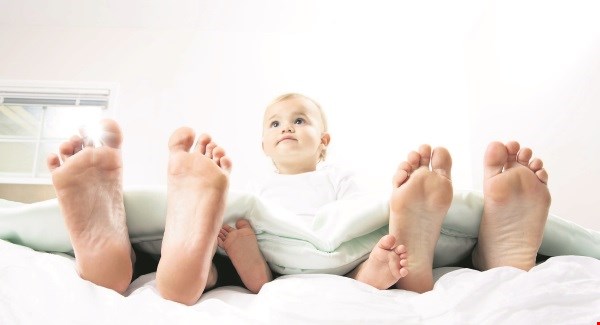 One of the more popular topics is sex, or rather, the lack thereof. “It seems to be a common lament,” says Powers (not her real name). “Ever since children came on the scene, we don’t have time for sex.”

It wasn’t that way when the Powers were newlyweds five years ago. At that point, Powers recalls fondly, she and her husband were having sex two or three times a week. But soon after the arrival of their daughter, now three, Dierdre simply felt too exhausted.

The baby’s schedule and their usual lovemaking time didn’t jibe, which complicated the issue. As newlyweds, Dierdre says, “we made love in the morning. But the baby wakes you up in the morning, and there goes the opportunity. Now, she comes into our bedroom and says, ‘Mommy, Daddy, get up.’ We have friends who park their kid in front of the TV in the morning and get in some romantic time. But that’s not an option for us. My daughter needs breakfast as soon as she gets up.”

The Powers’ situation — as well as that of other parents of young children — may sound hopeless, with some bleary-eyed but sexually frustrated parents wondering if they’ll just postpone sex until they send the kids off to college. But experts say there’s a way to salvage your sex life as new parents. Powers agrees. Over the course of the last few months, Powers, who is expecting another baby this winter, has worked with her spouse to infuse a lot more romance into their lives.

It sounds obvious, but the first step to improving your sex life is to admit it’s not great, experts say. Of course, there’s a productive and a not-so-productive way to do this. On the not-so-productive list: a 40-something father of two toddlers who mentions frequently to friends and neighbors that there’s not much action at his house these days. Saying that in front of his wife — who works full-time and tends the kids most of the time — won’t exactly boost his sex appeal in her eyes.

Instead, experts suggest, sit down and talk about the gigantic changes in your life and how you can still find time for sex.

Dierdre Powers and her husband decided they would try to stay up an extra 15 minutes to have sex at night. The strategy works, she says. She and her husband also agreed to give each other permission to “push the point” if one felt like having sex and the other did not. That meant, says Dierdre, that if her husband was “feeling frisky” and she wasn’t, he could keep pursuing her after she initially declined. She could do the same with

But the pursuing partner had to try to get the other in the mood (give him a back massage, tell her she looks great) and to stop if the one pursued really wasn’t up to it. Sometimes, Dierdre says, it just takes a little extra cajoling, trying something like, “Oh, sweetheart, are you really sure you’re all that tired?”

After kids are born, spouses can become so wrapped up in their parenting roles that they lose sight of all else, says Pepper Schwartz, PhD, a professor of sociology at the University of Washington and past president of the Society for the Scientific Study of Sexuality. “People stop seducing each other,” she says.

To rediscover each other as lovers, rather than parents, spend 10 minutes in bed after waking up and before going to sleep, suggests Kate Wachs, PhD, a Chicago psychologist and relationship expert. During these times, she says, “be positive and dedicated to your partner, just in conversation.” It doesn’t have to include sex, though these 10-minute appreciation breaks may lead to sex.

Once a week, experts advise, get a baby-sitter or lean on your friends and get out together as a couple. “Couples need a date night to be by themselves,” Wachs says. “Find friends with whom to rotate child care and date nights. Arrange sleepovers at each other’s houses so you can take turns having date nights. And don’t feel guilty about hiring baby-sitters. You’re not just a mom, you’re a wife and lover. When you become just a mom, that’s when you start telling your husband what to do all the time, just like you tell your kids. You have to switch modes.”

During the date, Wachs says, you shouldn’t talk about home, work, or kids. Instead, talk about goals, dreams, and other fun topics. “Think like you did at the beginning of your relationship,” Wachs says. If you had a passionate, romantic relationship before, you can reignite it, she says.

Consider a Weekend Away

One weekend a month away without the kids is an ideal goal, Wachs says, although finances or work schedules may make that impossible for some parents. The weekend away doesn’t have to be expensive, as the Powers know.

“This past weekend, our daughter went to my sister-in-law’s,” she says. And they acted like newlyweds. “We were laughing [after having sex],” she says. “We could be noisy and we could be leisurely and not rush it.”

Dierdre Powers, for one, has enjoyed the changes in her life since she and her husband started making more time for sex. “I always feel too tired to have sex, but it’s just a matter of getting out of the starting gate,” she says. “Once we get going, I realize, ‘Hey, this feels great. We should do this more often!’ ”