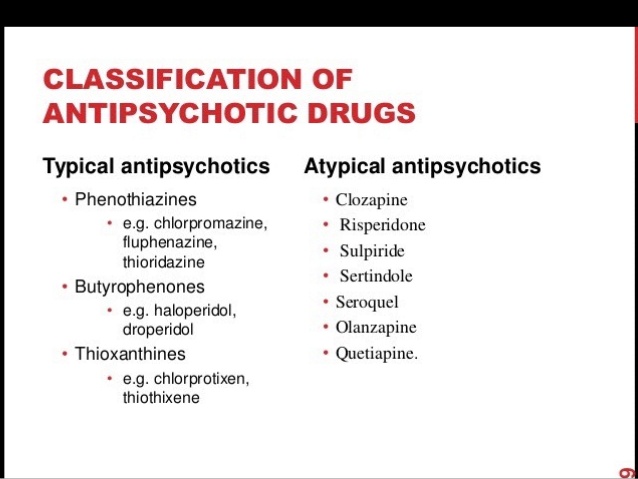 Antipsychotic drugs were discovered in the 1950s and currently over 20 compounds are licensed. They vary in clinical effects and especially in unwanted effects. Antipsychotics are classified in a number of ways and this brief guide touches on selected aspects of classification.

Discovery of antipsychotic properties of chlorpromazine and its launch in 1953 stimulated synthesis of similar compounds, and introduced drugs such as haloperidol, flupentixol, prochlorperazine, sulpiride and trifluoperazine. These antipsychotics showed worthwhile clinical efficacy in psychosis, such as alleviation of ‘positive’ symptoms of schizophrenia. However, they were associated with unpleasant reactions, including extrapyramidal side effects; this reduced adherence to treatment.

The antipsychotic clozapine (first launched in 1972 but then withdrawn over concerns about agranulocytosis) was reintroduced in 1990 for restricted indications because it was found effective for schizophrenia refractory to other antipsychotics; also, extrapyramidal effects seemed less troublesome with clozapine. This led to clozapine being categorised an ‘atypical’ antipsychotic. Consequently, antipsychotics already in use became known as ‘conventional’, ‘typical’, ‘classical’ or ‘first-generation’ antipsychotics.

Originally, antipsychotic ‘atypicality’ was characterised by reduced tendency to cause catalepsy in laboratory animals—this was considered predictive of reduced likelihood of extrapyramidal effects. Following reintroduction of clozapine, antipsychotic development focused on mimicking and improving on its therapeutic effects. The resulting ‘atypical’ or ‘second-generation’ antipsychotics include amisulpride, aripiprazole, asenapine, olanzapine, paliperidone, quetiapine, and risperidone.

It was suggested that these second-generation drugs shared the antipsychotic efficacy of first-generation drugs but had lower potential for extrapyramidal effects and were generally better tolerated. Some considered them more effective against ‘negative’ symptoms of schizophrenia, but this has not been convincingly proven as a class effect. These effects were put down to second-generation antipsychotics having different receptor effects (such as preferential mesolimbic binding and 5HT2A antagonism).

Antipsychotics can also be divided according to their chemical structure (graphical formulas of selected antipsychotics are shown below). The early antipsychotics, especially the phenothiazines (eg chlorpromazine and trifluoperazine) and the thioxanthenes (eg flupentixol and zuclopenthixol), are structurally related to antihistamines such as promethazine.

Many second-generation antipsychotics such as dibenzodiazepines (clozapine), thiobenzodiazepines (olanzapine) and dibenzothiazepines (quetiapine) are chemically related to tricyclic antidepressants.

The usefulness of chemical classification to the clinician is probably limited, but similarities in adverse effects among members of groups such as phenothiazines and thioxanthenes are worth understanding.

The precise mechanism of action varies between antipsychotics, but the relevance of this variation to clinical effects has not been fully established.

Antipsychotics can also be subdivided by their propensity for adverse effects. While dopaminergic D2 antagonism in the mesolimbic area of the brain is though to underlie antipsychotic effect, preferential binding to D2 receptors in the nigrostriatal pathway can lead to extrapyramidal effects.

Preferential binding to D2 receptors in the tuberoinfundibular pathway of the anterior pituitary can lead to hyperprolactinaemia. It is thought that butyrophenones, phenothiazines, and thioxanthenes are particularly likely to cause hyperprolactinaemia, as are amisulpride, paliperidone and risperidone.

The risk of hypothermia seems highest with antipsychotics that strongly antagonise the serotonin 5HT2 receptor.