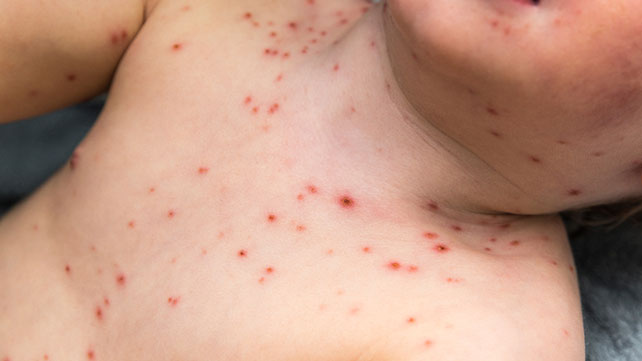 There is a blister-like rash, which first appears on the face and trunk, and then spreads throughout the body. Although not life-threatening, complications can arise.

Fast facts on chickenpoxHere are some key points about chickenpox. More detail is in the main article.

The hallmark symptom of chickenpox is a rash.

Before the rash appears, there will be:

After the rash appears, there will be:

During the whole cycle, new waves of spots can appear – in such cases, the patient might have different clusters of spots at varying stages of itchiness, dryness, and crustiness.

If the following occur, a doctor should be contacted:

Most healthy individuals make a full recovery, as with a cold or flu, by resting and drinking plenty of fluids.

Chickenpox generally resolves within a week or two without treatment. There is no cure, but a vaccine can prevent it.

A doctor may prescribe medication or advise on how to reduce symptoms of itchiness and discomfort, and also on how to prevent the infection from spreading to other people.

Pain or fever: Tylenol (acetaminophen), which is available to purchase online, may help with symptoms of high temperature and pain. It is important to follow the instructions provided by the manufacturer. Aspirin containing products should NOT be used for chickenpox as this can lead to complications. Acetaminophen (Tylenol) can be used at any time during pregnancy.

Avoiding dehydration: It is important to drink plenty of fluids, preferably water, to prevent dehydration. Some doctors recommend sugar-free popsicles or Pedialyte for children who are not drinking enough.

Mouth soreness: Sugar-free popsicles help ease symptoms of soreness if there are spots in the mouth. Salty or spicy foods should be avoided. If chewing is painful, soup might be a good option, but it should not be too hot.

Itchiness: ltchiness can become severe, but it is important to minimize scratching to reduce the risk of scarring.

The following may help prevent scratching:

Antiviral medication may be prescribed during pregnancy, for adults who get an early diagnosis, in newborns, and for those with a weakened immune system. Acyclovir is one example.

This works best if it is given within 24 hours of developing symptoms. Acyclovir reduces the severity of symptoms but does not cure the disease.

A vaccine is available for varicella. For children, 2 doses of the varicella vaccine are given, one at 12 to 15 months and one at age 4 to 6 years. These are 90 percent effective at preventing chickenpox.

In the United States, the chickenpox vaccine is routinely given to children.

Adults are more susceptible to complications than children, but even in adults, they are rare.

If the blisters become infected with bacteria, the risk of complications is greater.

Pregnant women, newborns, and infants up to 4 weeks old, as well as those with weakened immune systems, are more likely to experience complications.

If the skin around the spots and blisters becomes red and tender or sore, they may be infected. Some people with chickenpox can go on to develop pneumonia.

Encephalitis: An inflammation of the brain may occur.

Reye’s syndrome: This rare but serious condition can occur when children and teenagers are recovering from a viral infection, including chickenpox. It causes the liver and brain to swell.

Most people who develop complications will make a full recovery.

Chickenpox can have added complications if it occurs during pregnancy.

During pregnancy, there is a slightly higher risk of developing pneumonia with chickenpox.

There is also a danger of passing the infection on to the fetus.

If infection occurs during the first 20 weeks of pregnancy, there is a higher risk of fetal varicella syndrome, which can lead to scarring, eye problems, brain drainage, and shortened arms or legs.

If the infection happens later in pregnancy, the varicella may be transmitted directly to the fetus and the baby can be born with varicella.

If you become exposed to varicella during pregnancy, whether chickenpox or shingles, it is important to talk to a doctor right away.

Chickenpox and a weakened immune system

The risks of catching chickenpox and developing complications are higher in a person with a weakened immune system.