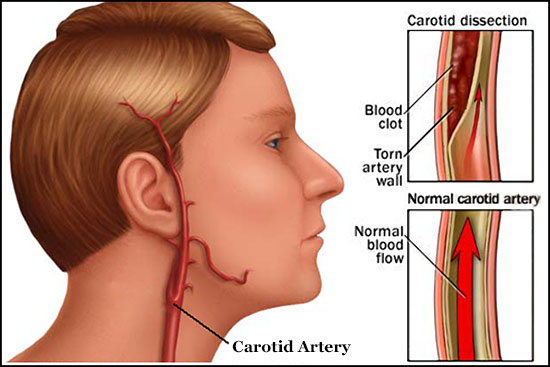 Carotid artery dissection begins as a tear in one of the carotid arteries of the neck, which allows blood under arterial pressure to enter the wall of the artery and split its layers. The result is either an intramural hematoma or an aneurysmal dilatation, either of which can be a source of microemboli, with the latter also causing a mass effect on surrounding structures.

Carotid artery dissection is a significant cause of ischemic stroke in all age groups, but it occurs most frequently in the fifth decade of life and accounts for a much larger percentage of strokes in young patients. [1] Dissection of the internal carotid artery can occur intracranially or extracranially, with the latter being more frequent. Internal carotid artery dissection can be caused by major or minor trauma, or it can be spontaneous, in which case, genetic, familial, or heritable disorders are likely etiologies.

Although in practice, dissections are labeled spontaneous in the absence of major blunt or penetrating trauma, [2] when they are associated with minor mechanism trauma they may be caused or influenced by an underlying arteriopathy. [3] Patients can present in a variety of settings, such as a trauma bay with multiple traumatic injuries; a physician’s office with nonspecific head, neck, or face pain; or an emergency department (ED) with a partial Horner syndrome.

Sophisticated imaging techniques, which have improved over the past two decades, are required to confirm the presence of dissection. Most ischemic cerebral symptoms arise from thromboembolic events; therefore, early institution of antithrombotic treatment provides the best outcome. [4]

Once diagnosed and treated, patients with carotid artery dissection require regular follow-up and imaging studies of both carotid arteries. Healing usually takes 3-6 months, and the incidence of contralateral dissection is higher in these patients than in the general population. When the condition is diagnosed early, the prognosis is usually good. A high index of suspicion is required to make this difficult diagnosis.

Patients with internal carotid artery dissection can present with nonspecific complaints and in all settings. Maintaining a high index of suspicion for carotid dissection is critical whenever a patient presents with unusual focal neurologic complaints, particularly if the cranial nerves are involved and of the patient has sustained major mechanism trauma, minor mechanism stress, or a direct impact on the neck. Failure to consider the diagnosis in young patients presenting with neurologic symptoms is a potential medicolegal pitfall.

In cases of high-impact trauma, a history of cervical hyperextension, flexion, or rotation should alert the physician to the possibility of dissection. In patients with multiple traumatic injuries, the appearance of these nonspecific symptoms may be delayed for 1-5 days after the injury.

Even patients with seemingly minor trauma can develop dissection of the internal carotid artery. Symptoms may range from headache to hemiparesis. Precipitating events should be sought and may include chiropractic manipulation, yoga, gymnastics, sports injuries (including direct impact of high-velocity ball or other direct impact to the neck), overhead painting, coughing, or sneezing.

Typical presenting symptoms are as follows:

Pain is the initial symptom of a spontaneous internal carotid artery dissection presenting to a physician. Headache (including neck and facial pain) is usually described as constant and severe and is commonly ipsilateral to the dissected artery. It usually precedes a cerebral ischemic event, unlike headache associated with stroke, which usually follows or accompanies the ischemic event. Recurrence of neck pain suggests extension or recurrence of the dissection.

Unilateral facial or orbital pain is also common, and 25% of patients have isolated ipsilateral neck pain. Cluster-like headache with pain centered in or around the eye has been described in a case of spontaneous internal carotid artery dissection. [9]

Hypogeusia, or decreased taste sensation, may also be a presenting symptom.

In fewer than half of patients presenting with a carotid artery dissection, unilateral oculosympathetic palsy (partial Horner syndrome), may develop, and these patients will experience miosis, visual disturbance, and mild ptosis that may not be detected clinically. Isolated transient vision loss may also be a presenting complaint. Irreversible blindness from an ischemic optic nerve injury is rare. As many as 20% of patients may present with an ischemic stroke without any warning signs.