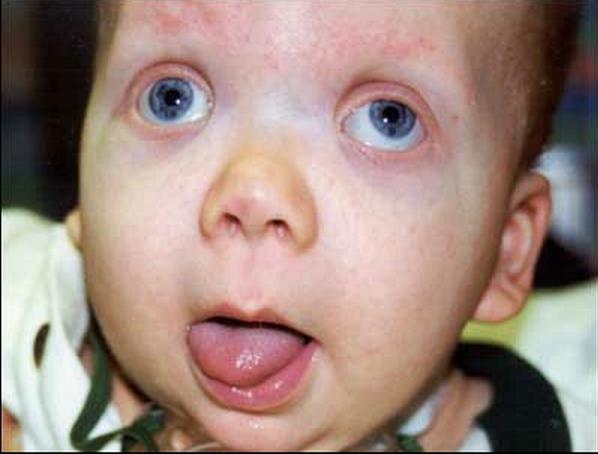 In 1964, Hans-Rudolf Wiedemann reported a familial form of omphalocele with macroglossia in Germany. In 1969, J. Bruce Beckwith of Loma Linda University, California, described a similar series of patients. Originally, Professor Wiedemann coined the term EMG syndrome to describe the combination of congenital exomphalos, macroglossia, and gigantism. Over time, this constellation was renamed Beckwith-Wiedemann syndrome (BWS). Beckwith-Wiedemann syndrome is the most common overgrowth syndrome in infancy.

Although the underlying causes of Beckwith-Wiedemann syndrome remain unclear, approximately 80% of patients demonstrate genotypic abnormalities of the distal region of chromosome arm 11p. The Beckwith-Wiedemann syndrome region of 11p was the first identified example of imprinting in mammals (ie, the process whereby the 2 alleles of a gene are expressed differentially). Authors have most often used the term imprinted to refer to the expressed allele. For example, the maternal allele of band 11p15.5 is normally expressed, or imprinted. Some authors, however, designate the silent allele as the imprinted gene.

When reviewing the literature, a reader must bear in mind this inconsistent and confusing nomenclature. Imprinting has been associated with structural modifications of DNA near the gene, such as methylation or lack of acetylation. Several 11p genes are imprinted, including p57 (a cation-independent cyclase), IGF-2 (the gene for insulinlike growth factor-2 [IGF-2]), the gene for insulin, and H19. [2]

H19 is particularly interesting because this gene is transcribed but not translated. H19 messenger RNA (mRNA) appears critical for proper imprinting of the nearby insulin and IGF-2 genes because deletion of H19 or transposition from its usual position relative to IGF-2 disrupts normal imprinting. Evidence reveals that H19 mRNA binds IGF-2 mRNA binding protein, which may be one mechanism by which it affects IGF-2 production.

The mode of inheritance in Beckwith-Wiedemann syndrome is complex. Reported patterns include autosomal dominance with variable expressivity, contiguous gene duplication at band 11p15.5, microdeletions, and aberrant genomic imprinting (resulting from a defective or absent copy of the maternally derived allele). Although not universal, the overgrowth associated with Beckwith-Wiedemann syndrome appears to be most often the result of increased IGF-2 action within prenatal and postnatal tissues.

The cardinal features of Beckwith-Wiedemann syndrome include prenatal and postnatal overgrowth, [4] macroglossia, and anterior abdominal wall defects (most commonly, exomphalos).

Although mental retardation has been reported as a feature of Beckwith-Wiedemann syndrome, uncontrolled hypoglycemia during infancy, rather than congenital malformation of nervous tissue, may be a more significant etiologic factor.

Additional variable complications include organomegaly, hypoglycemia, hemihypertrophy, genitourinary abnormalities, and, in about 5-20% of children, embryonal tumors (most frequently Wilms tumor) and adrenal tumors such as adrenocortical neoplasias.

Beckwith-Wiedemann syndrome pathogenesis involves disrupted imprinting of one or more genes because the sex of the transmitting parent determines the pattern and risk of transmission in familial cases.

Approximately 15% of patients with Beckwith-Wiedemann syndrome cluster in families; the remainder are sporadic.