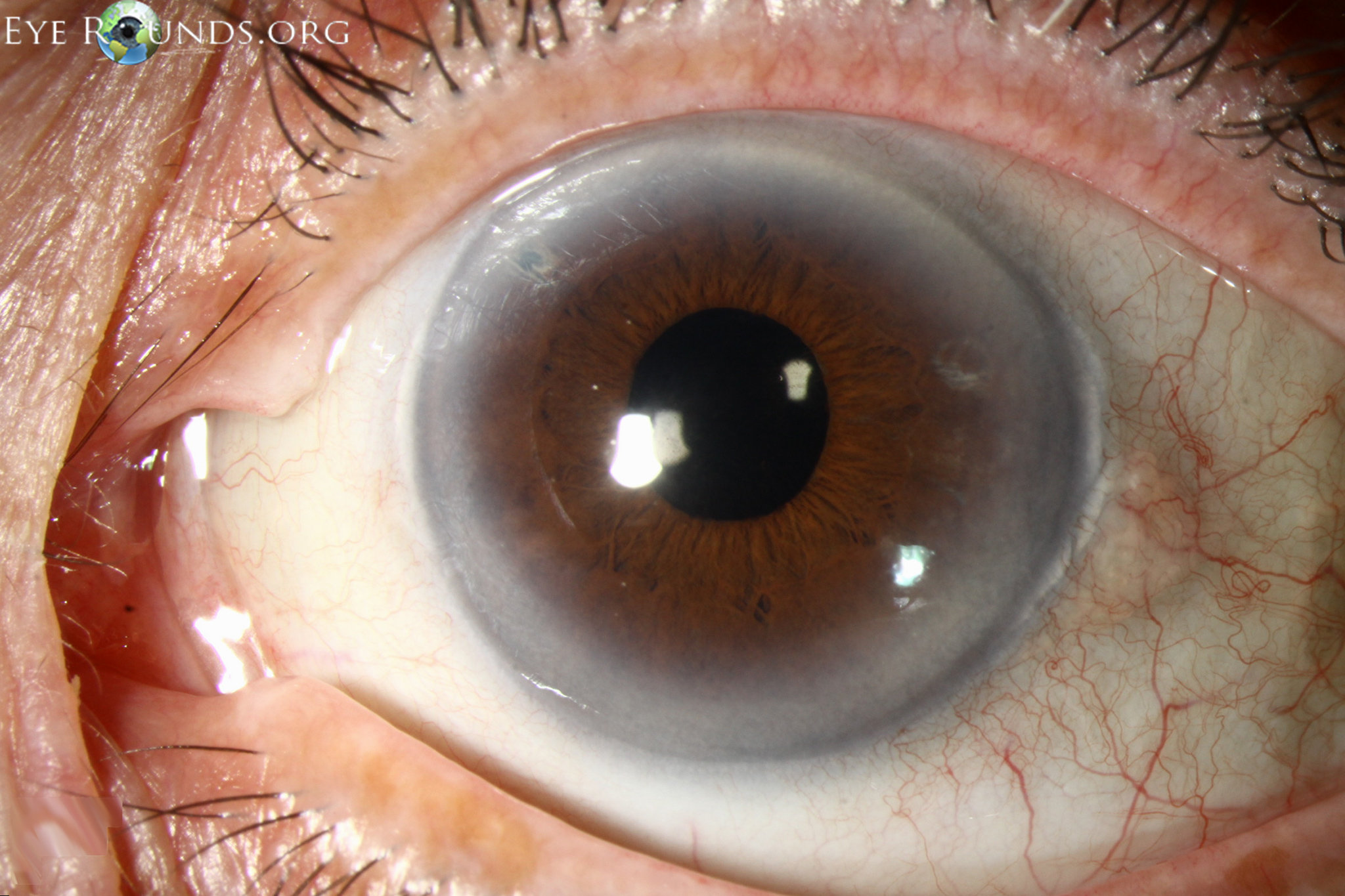 Arcus senilis is generally harmless, although it can sometimes be a sign of high cholesterol in people under 45 years of age.

In this article, we take a look at the causes and risk factors for arcus senilis, along with what can be done to treat it.

Overview
Arcus senilis may appear as a white, gray, or blue ring within the eye.
Image credit: Afrodriguezg, 2014

Those affected by this eye condition will notice a half circle, full circle, or arc around the cornea of their eye. The cornea is the clear, dome-like front part of the eye.

The arc or circle is usually white, gray, or blue in color. It forms in front of the iris, which is the colored part of the eye.

Although the appearance of arcus senilis can be alarming, it is usually not considered to be a danger to a person’s health or a sign that vision is deteriorating.

However, visiting a doctor will ensure that there are no hidden causes that could lead to further health complications if the eye change is left untreated.

The vast majority of people affected by arcus senilis are older adults, as the main cause of the condition is aging.

Arcus senilis occurs due to fat deposits, often referred to as lipids, forming in the outer part of the cornea. Fats in the blood come from fatty foods in a person’s diet and are also produced by the liver.

Cholesterol is one type of fat that appears in the blood. However, the occurrence of arcus senilis does not necessarily mean that someone has high cholesterol.

If arcus senilis appears in people under the age of 40 years old, doctors will carry out a test to check for high cholesterol.

If a person is found to have high cholesterol, this may be due to lifestyle factors or an inherited condition known as Schnyder central crystalline dystrophy. This condition causes cholesterol crystals to build up in the central cornea along with arcus senilis in the peripheral cornea.

Although arcus senilis is a common condition, it is more likely to occur in men. It is also possible for infants to be born with arcus senilis, but this is extremely rare.

For most people, arcus senilis is no cause for concern, and it will appear eventually in almost everyone who reaches old age.

A person with arcus senilis may notice:

People with arcus senilis are unlikely to have any other symptoms. Vision will remain unaffected.

An eye doctor may use a slit lamp to diagnose arcus senilis.

To diagnose arcus senilis, a doctor will perform an eye examination. The eye doctor will examine the front of the eye with a microscope called a slit lamp.

The examination may also involve placing special eye drops into the person’s eye that widen the pupil. These drops allow the doctor to inspect the blood vessels at the back of the eye for signs of disease.

The doctor will check the thickness of the vessels for increased levels of fat deposits. They will also look for signs of atherosclerosis, which is a condition where arteries become clogged with fatty substances.

If both arcus senilis and atherosclerosis are suspected, people are usually referred to their primary care doctor, an internist, or a cardiologist.

A blood test will determine whether someone has high cholesterol. If they do, they may be prescribed medicine or advised on a suitable diet and exercise program to lower the cholesterol in their blood.

Medicines used to lower levels of cholesterol include:

High cholesterol may be a cause if arcus senilis appears in someone who is younger than 40 years old.

The link between arcus senilis and high cholesterol in older people is a subject of debate among medical professionals.

Some experts believe that there is a link between the condition and high cholesterol, which can lead to cardiovascular problems.

Others argue it is a normal sign of aging and that there is no link between the condition and higher levels of cholesterol.

If arcus senilis appears in a person under 40 years old, there is more likely to be cause for concern, as it may indicate that they have high cholesterol levels.

High cholesterol could be due to diet, lifestyle, or genetic conditions, such as familial hyperlipidemia (FH). FH is a hereditary condition where extremely high levels of cholesterol or triglycerides are found in a person’s blood, putting them at increased risk of heart disease.

Arcus senilis alone is not known to have any complications unless it is a sign of high cholesterol. High levels of cholesterol in a person’s blood can cause significant problems, such as coronary artery disease or cardiovascular disease.

Can arcus senilis be treated?

There is no cure or treatment for arcus senilis. Once it appears, it will not fade or disappear.

Some people opt for a technique known as corneal tattooing to cover up the ring, but doctors do not recommend this.

If arcus senilis is a sign of high cholesterol, a doctor may recommend a diet that is low in saturated fats and high in fruit, vegetables, and fiber. Increased exercise and quitting smoking can also help.

However, there is no evidence that lowering cholesterol intake will then make arcus senilis disappear.