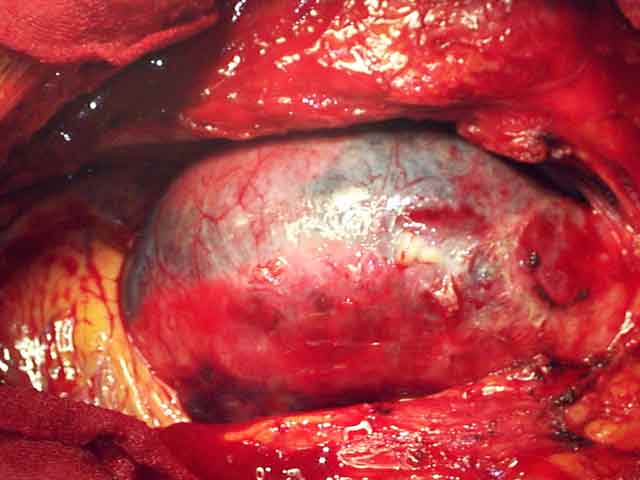 Aortic dissection is the most common catastrophe of the aorta, 2-3 times more common than rupture of the abdominal aorta. When left untreated, about 33% of patients die within the first 24 hours, and 50% die within 48 hours. The 2-week mortality rate approaches 75% in patients with undiagnosed ascending aortic dissection.

The establishment of the International Registry of Acute Aortic Dissection in 1996, which gathers information from 24 centers in 11 countries, has helped in the development of an understanding of the complexity of aortic dissection.

Dissections of the thoracic aorta have been classified anatomically by 2 different methods. The more commonly used system is the Stanford classification, which is based on involvement of the ascending aorta and simplifies the DeBakey classification.

The Stanford classification divides dissections into 2 types, type A and type B. Type A involves the ascending aorta (DeBakey types I and II); type B does not (DeBakey type III).

This system helps to delineate treatment. Usually, type A dissections require surgery, while type B dissections may be managed medically under most conditions.

The DeBakey classification divides dissections into 3 types, as follows:

Type III dissections are further divided into IIIa and IIIb. Type IIIa refers to dissections that originate distal to the left subclavian artery but extend proximally and distally, mostly above the diaphragm.

Type IIIb refers to dissections that originate distal to the left subclavian artery, extend only distally, and may extend below the diaphragm.

Thoracic aortic dissections should be distinguished from aneurysms (ie, localized abnormal dilation of the aorta) and transections, which are caused most commonly by high-energy trauma.

The mortality rate of patients with aortic dissection is 1-2% per hour for the first 24-48 hours. Initial therapy should begin when the diagnosis is suspected. This includes 2 large-bore intravenous lines (IVs), oxygen, respiratory monitoring, and monitoring of cardiac rhythm, blood pressure, and urine output.

Clinically, the patient must be assessed frequently for hemodynamic compromise, mental status changes, neurologic or peripheral vascular changes, and development or progression of carotid, brachial, and femoral bruits.

Aortic dissection associated with cocaine ingestion is challenging. It has been argued that using beta blockers alone without any simultaneous alpha blockers may allow unopposed alpha aderenergic vasoconstriction, potentially worsening myocardial ischemia. Therefore, it is recommended labetalol be used as it has both alpha- and beta-blocking properties.

Retrograde cerebral perfusion may increase the protection of the central nervous system during the arrest period.

Up to one third of patients with acute aortic dissection may have their diagnosis missed. [3]  Factors that contribute to an initial missed diagnosis of aortic dissection include female sex, the absence of back pain, and/or the presence of extracardiac atherosclerosis. Patients whose aortic dissection was initially missed also tend to have more imaging studies and longer time to surgery; however, these do not appear to affect adjusted long-term all-cause mortality. [3]

Magnetic resonance angiography (MRA) may help in the evaluation of, and guide management of, suspected acute aortic dissection in patients with contraindications to compute tomography angiography (CTA) in the emergency department. [4]

The mortality rate from aortic arch dissections is about 10-15%, with significant neurologic complications occurring in another 10% of patients. The mortality rate is influenced by the patient’s clinical condition.

Whether systolic hypertension or pain is present, beta blockers are used to reduce arterial dP/dt.

To prevent exacerbations of tachycardia and hypertension, treat patients with IV morphine sulfate. This reduces the force of cardiac contraction and the rate of rise of the aortic pressure (dP/dt). It then retards the propagation of the dissection and delays rupture.

These agents are used to reduce arterial dP/dt. For acute reduction of arterial pressure, the potent vasodilator sodium nitroprusside is effective. To reduce dP/dt acutely, administer an IV beta blocker in incremental doses until a heart rate of 60-80 beats/min is attained.

Multiple case reports describe patients who received thrombolytics and were found later to have a dissection. The diagnosis of aortic dissection can be subtle.

The diagnosis depends on clinical suspicion, with contributory findings on history, physical examination, and imaging studies.

Obtaining a chest radiograph prior to administering thrombolytics is considered prudent.

Checking blood pressures in both arms and listening for carotid bruits also can help to diagnose aortic dissection prior to administering thrombolytics. The entire clinical picture must be taken into account.