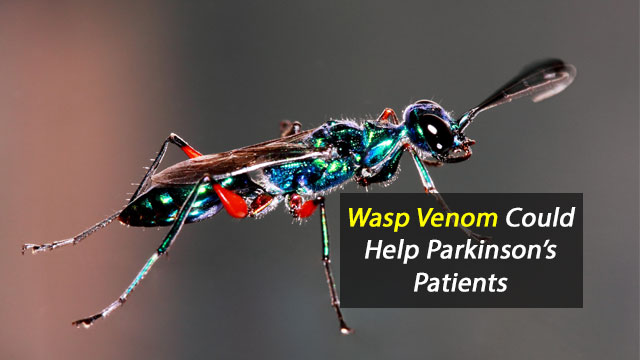 Scientists say the venom of the emerald cockroach wasp (Ampulex compressa) – which it uses to control the mind and actions of the cockroaches it preys upon – has an effect that produces similar responses as those in Parkinson’s disease. This could lead to new ways of treating this debilitating neurological condition.

Once a cockroach gets stung by this wasp, it becomes a host for the wasp’s egg, after first entering a zombie-like state called hypokinesia. Scientists now think they’ve identified certain peptides in the venom that cause this loss of control.

And while it’s going to take a while for bug studies to translate into a drug that might have a chance of working in humans, we might be able to understand more about how Parkinson’s works and affects the brain thanks to the gruesome attack strategy of the emerald cockroach wasp.

“Some types of molecules could be useful in mitigating these Parkinsonism-like symptoms,” senior researcher Michael Adams from the University of California, Riverside, told Elaina Zachos at National Geographic.

To take a closer look, Adams and his team milked a group of wasps for their venom and studied the toxins it contained using a combination of liquid chromatography and mass spectrometry techniques.

They came across a new family of peptides, given the name ampulexins, that they think plays a part in the cockroach mind control.

Sure enough, after injecting cockroaches with the newly identified compounds, the insects became less responsive to electric jolts and more zombified. The scientists think the peptides might be interfering with the dopamine pathway that help control physical and emotional responses.

And that’s something that Parkinson’s seems to do as well – or at least as far as we can tell at the moment. If these peptides do indeed work like Parkinson’s, we could use one to study the other, but more research is needed to establish the link.

While scientists know all too well the effects of Parkinson’s disease, including involuntary movements and a loss of motor control, how it starts remains something of a mystery.

Recent studies have suggested the disease is somehow caused by our gut bacteria, with researchers spotting certain differences in the microbes inside people with Parkinson’s compared with those without.

We also know the condition kills off brain cells in the substantia nigra region – which again links to the key dopamine pathways in the brain.

While work continues to tap into exactly what causes Parkinson’s disease and how its devastating symptoms take hold, research into the rest of the natural world might turn up some helpful findings that can be applied to humans.

And that includes the venom of the emerald cockroach wasp. Adams and his team are continuing their investigations.

Entomologist Ellen Martinson from the University of Georgia, who wasn’t involved in the study, says the new research has a lot of promise, even if it could be years before we develop a new kind of treatment from it.